Tonight the Red Sox and Dodgers face off in a potential World Series Preview. A year ago the Red Sox were sellers at the deadline as they were out of the race early. The Dodgers were in it and made a push to make the playoffs but fell short.

A year ago today the two clubs pulled off a post deadline deal that sent Josh Beckett, Carl Crawford and Adrian Gonzalez to the Dodgers in a trade that was a largely a salary dump for the Red Sox. 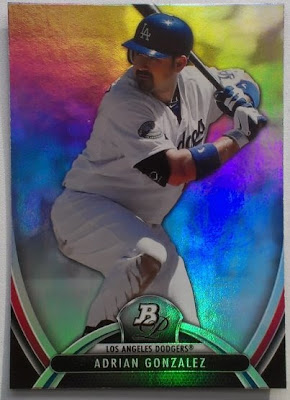 Ideally trades work out for both partners.  For the moment this trade appears to have worked out for both the Dodgers and Red Sox.  The Red Sox have returned to their pre-2011 playoff form, while gaining significant payroll significant payroll flexibility.  The Dodgers have surged to commanding NL West lead with under 40 games to play.  In the long term LA may have issues dealing with the future contract commitments they have acquired in the deal, but none of that matters in 2013.

Adrian Gonzalez is putting together another solid season. His batting average is just a tick below .300 and he has a shot at fourth consecutive 100 RBI season. A-Gon has been pretty consistent over the course of his career playing 156+ games every season since becoming a full time starter in 2006. How many are veratile enought to have had seasons where they have led the league in Hits (2011) Walks (2009) and also have a 40 homer season under their belts (2009).

The Dodgers have Adrian Gonzalez contracted out through his age 36 season in 2018.  He doesn't put up the power numbers that he did earlier in his career, but he does continue to rack up hits. If Gonzalez can stick around the game into his 40s he has a chance at 3000 hits.

This is our 2nd consecutive 2013 Bowman Platinum card. Topps had a promotional booth at the recent SABR conference Philadelphia or else I wouldn't even have these cards. This set isn't targeted for me, but once again, I have to admit that I enjoy how they photograph.  The rainbow effect on the chrome/mirror background makes for great effects.