The Braves currently carry the best record in baseball and this week the Phillies are in Atlanta to face the NL East division leaders.

As the best team in the league the Braves have a couple of guys that are being discussed as MVP candidates.  One of those players is First Baseman Freddie Freeman.

Freeman is among the top ten in several offensive categories on the NL Leaderboards. He is third in the league in RBI (79) and 5th in OBP (.390).  In 2011 Freeman was runner up to teammate Craig Kimbrel for Rookie of the Year. This season Freddie made his first All-Star team.

Freddie Freeman is in his 3rd full season and he won't turn 24 for another month, as you can tell his career is off to a pretty good start. So good that the #1 age relavant comp for Freeman is Hall of Famer Eddie Murray. 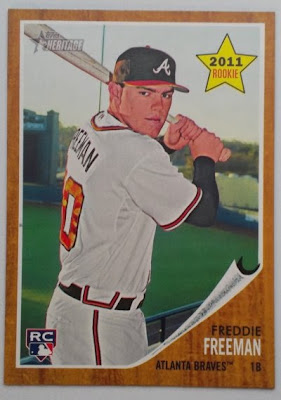 Warning shot for 2014 Topps Heritage.  I am a pretty big fan of the original 1962 Topps design. With 2011 Heritage, Topps proved to me that it isn't all about design. There were way to many headshots and hatless pix in 2011 Heritage - when paging thru a binder the set looks pretty bland.

That being said the Freddie Freeman pops a little since it isn't a head shot. I do have a question.  One question, What the heck is with the lighting.  There is a pink square of light on the side of Freddie's cap and face - kind of an oddity on a baseball card.  must be the sun going down at Disney. 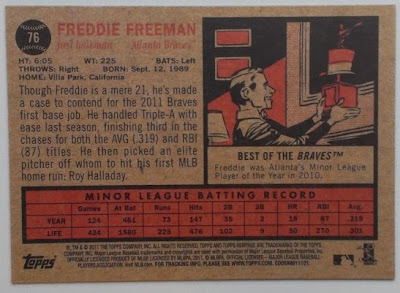 
If you can read the -toon here you find that Freeman was the Braves 2010 minor league player of the year.  The Phils 2010 player of the year went to outfielder Domonic Brown, who is in the middle of his own breakout season.

1962 Topps #76
The #76 card from the original 1962 Topps set belonged to then Milwaukee Brave Howie Bedell who went on to play with the Phillies.  With any luck we will be featuring Bedells 62T card later this week.