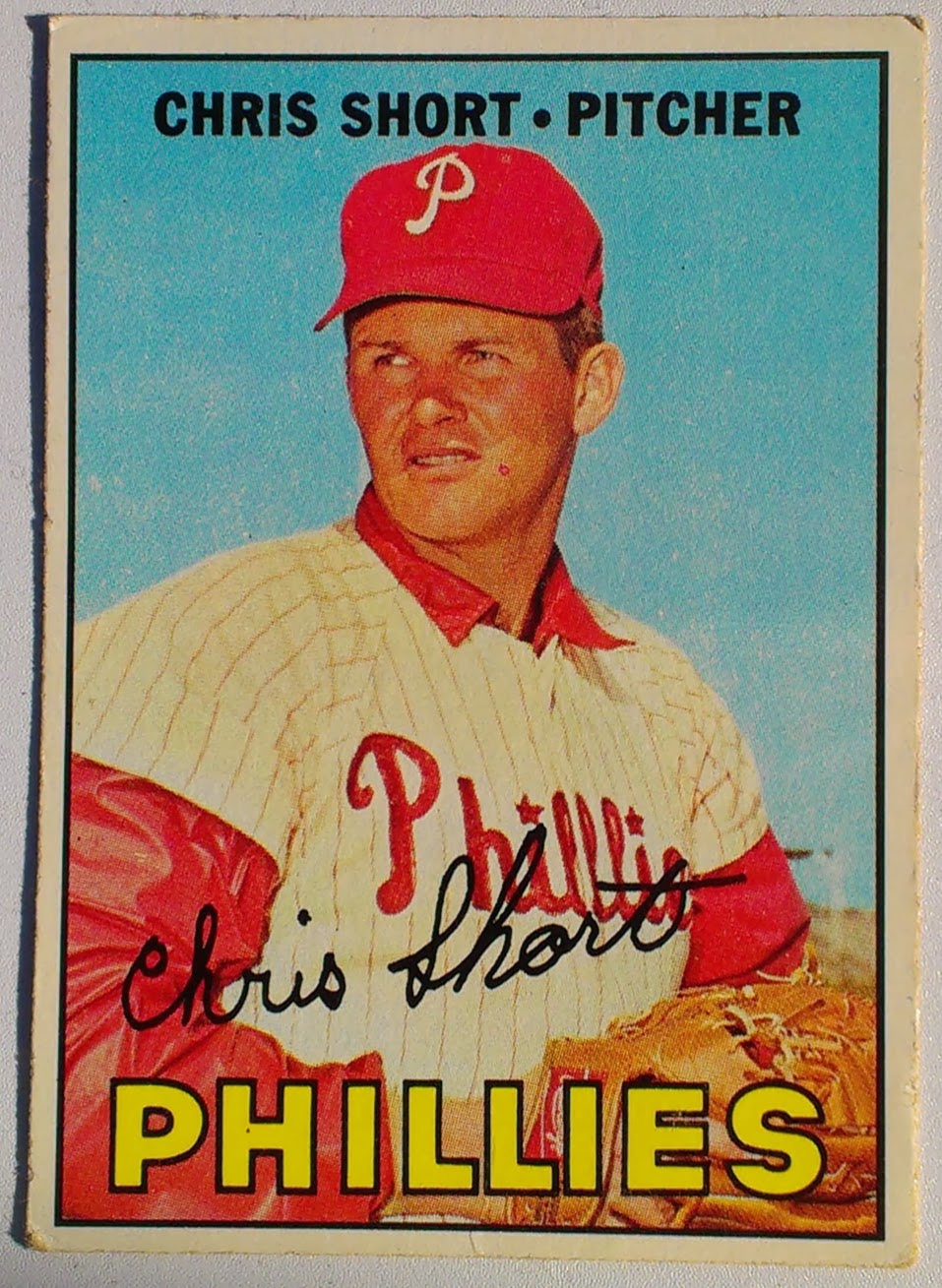 The Boxscore from Short's first game is here.

Yes Chris Short pitched in a game 8 years before he had a baseball card.For most of the 1960s Chris Short, like Matt Wieters who we featured yesterday, was not seen on a Topps Card. I poked around a bit to try and find out exactly what Short's objection was and why that changed. There is the well documented case of Maury Wills not appearing in Topps until 1967 - Apparently Topps didn't view Wills as a prospect and then he got contracted to Fleer (which only made one release). I didn't see any evidence that Short went unsigned for the same reason. One theory I have are that Short was the son of a lawyer and perhaps he saw the Topps contract as unfairly cheap, Chris Short's SABR biographer Andy Sturgill proposed that Short was strictly focussed on baseball and may not have wanted to bother with outside issues.


1964
It is well documented how during the closing weeks of the 1964 season Gene Mauch used/misused Chris Short and future Hall of Famer Jim Bunning. Between September 22 and October 2 1964 Short started 4 games. Prior to that he had pitched on 2 days rest a couple of times he accumulated 10 starts between August 30th and 10/2.

The Phillies collapse cannot erase what was otherwise a very good campaign by Short. The then 26 year old lefty put together a 17-9 record with a 2.20 ERA (3rd in the NL) and 6.2 WAR(4th). This was all good enough to put Short on the first of his 2 all-star squads and pick up a couple of MVP votes.

Chris Short spent almost his entire career with the Phillies winning 132 games over 14 seasons ranking him 2nd behind only Hall of Famer Steve Carlton among the clubs southpaws.

Banished
Banished is a term that Night Owl Cards came up with to describe a player that isn't on the Topps Checker for contractual or other reasons. NOC was basically talking about the above mentioned Maury Wills situation, but also discussed Matt Wieters and others. Between his column and Comments especially several by Jim from Downingtown of the late 1960s Topps blogs this is a pretty good list of the Banished.
.
Maury Wills - No Topps pre-1967
Chris Short - No Topps pre-1967
Rusty Staub -
Dick Hall 64-66, 69
Joe Adcock 64-66
Tony Horton 66-70
Lenny Green 67-68
Vinegar Bend Mizell - No Cards after 1958

Pete Rose - No one speaketh his name on 2013 Topps backs and several other recent Topps sets.

Thanks for the mention!

This is one of my favorite Phillies cards, and this is the 2nd consecutive day I've seen it on these blogs. (Also on "Cards That Never Were" yesterday, in the Koufax/Drysdale post)

Freddy Galvis has mysteriously not appeared on a Topps issue since 2011. In fact, he does not even have an "official," by MLB standards, rookie card yet -- even though he appeared in a number of Bowman Prospect insert sets and Topps' 2011 Minor League set. I haven't found any reason why this would be the case.

(This is mattapp from 14,000 Phillies -- I keep getting open ID errors when I try to use my Wordpress ID to leave my comment.)