Tonight in honor of the Phillies rare trip to Minnesota (and as part of our 1976 All-Star Game Coverage) we take a look at Twins Hall of Famer Rod Carew. 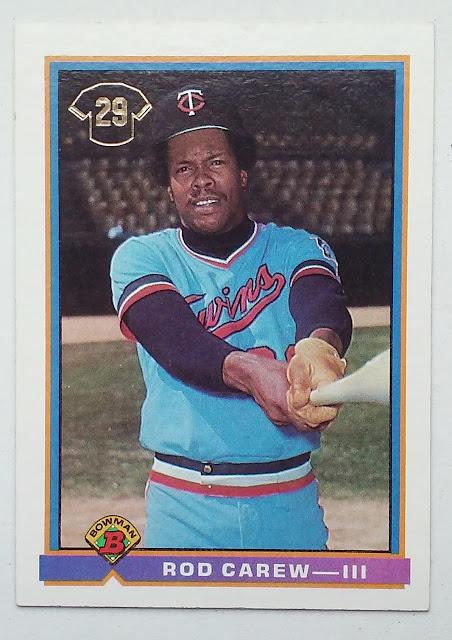 When he played in Philadelphia's Bicentennial All-Star Game Rod Carew was 30 years old and was playing in his 10th major league season.

Incredibly He was also a member of his 10th All-Star Team.

In every one of his eight previous All-Star games (Made team but DNP 1970) Carew played 2nd Base. 1976 was the first mid-summer classic which Carew played at his new position, First Base.

The Seven time batting champion did not fare quite as well in All-Star game play. In 1976 Carew was 0-3 with a walk and a stolen base. At the time the performance brought his career numbers to 2-24 a .083 Batting Average. Quite an anomaly for a player who batted .328 in the regular season through that point in his career.

Carew's All-Star performances would improve during the 2nd half of his career, he finished with a career .244 BA in 48 ABs. His best performances was in 1978 when he had a pair of triples and scored two runs.

1991 Bowman
I went with the 1991 Bowman card over one of the many Rod Carew All-Star cards.

This is because I am fond of the #29 Jersey stamp on the upper right. The flair represents Carew's uniform number that was retired by the Twins on July 19 1987.

Recently Rod Carew suffered a major heart attack, and may possibly need a heard transplant. Subsequently in partnership with the Twins Carew and his wife Rhonda launched a project to raise funds for the American Heart Association - the name of the initiative is The Heart of 29 Campaign. 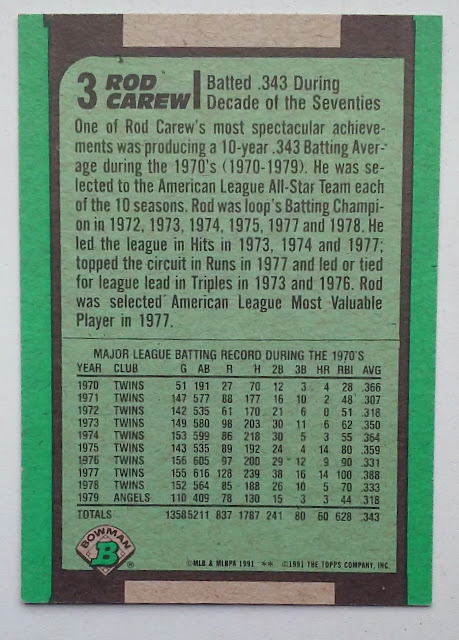 The post career card highlights Carew's accomplishments during the 1970s including his six batting titles and 1977 MVP award.

This card is sweet... but it could have been much sweeter had Bowman not cropped out half of Rod's bat.