This happened a couple of weeks ago but Team Phungo is still recovering from our recent Trip.

We spent a week in Madison and Milwaukee which gave us an opportunity to knock another stadium off our list. In the game the Brewers hosted the Cincinnati Reds. The two teams are battling for the cellar of the NL Central, consequently the game itself was secondary to the stadium visit. 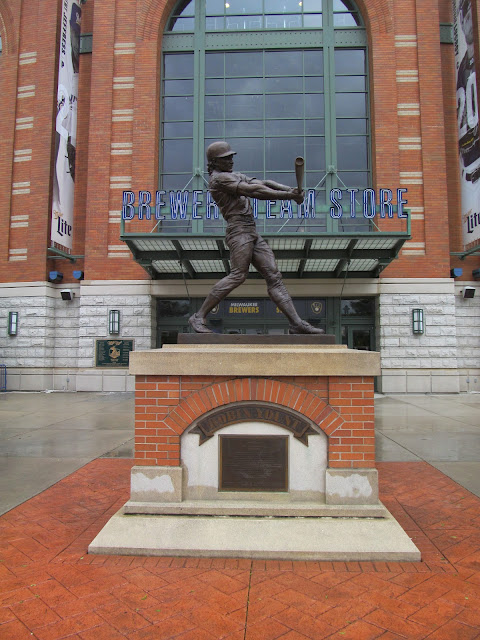 The Brewers have a series of statues outside the stadium including this one that honors Robin Yount, the Franchise All Time Leader in Games, ABs, Hits, Runs, RBIs, Doubles, Triples, and WAR. Ryan Braun is the only Brewer who has more Home Runs than Yount. 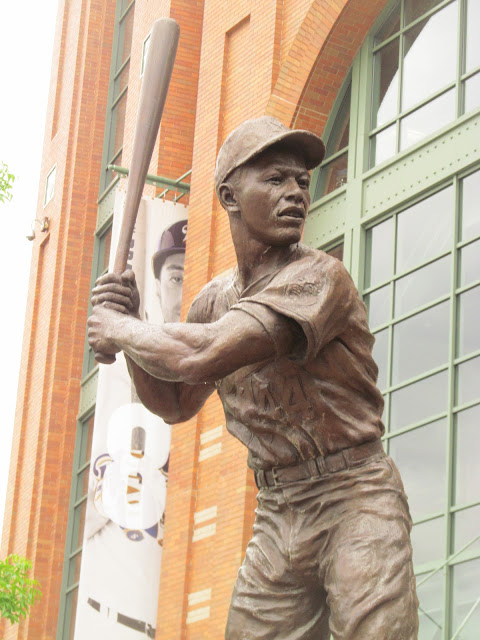 The man who broke Babe Ruth's Home Run record only played two seasons with the Brewers but he spent an additional dozen seasons in Milwaukee as a Member of the Braves. Hank Aaron is rightfully honored here by the Brewers. 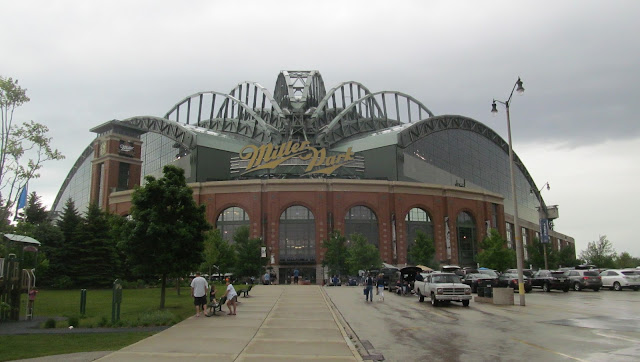 From this angle Miller Park looks like a Spaceship whose design was inspired by a tarantula. I took this picture while walking up a path from the location of old County Stadium, where Hank Aaron hit his last Home Run. 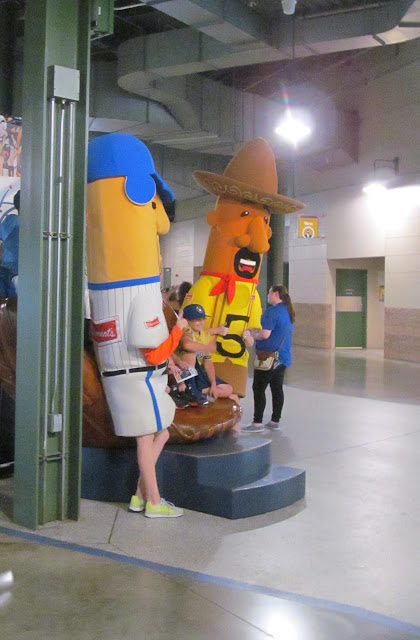 I was pretty excited for the sausage race. Here are Chorizo and the Hot Dog hanging out pregame. 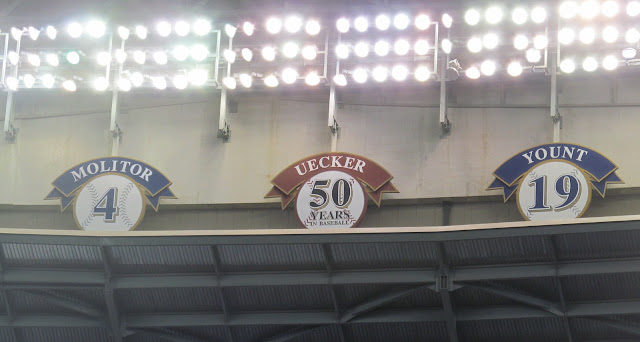 Bob Uecker's 50 Year Plaque is in a nice neighborhood with Hall of Famers Paul Molitor and Robin Yount nearby. 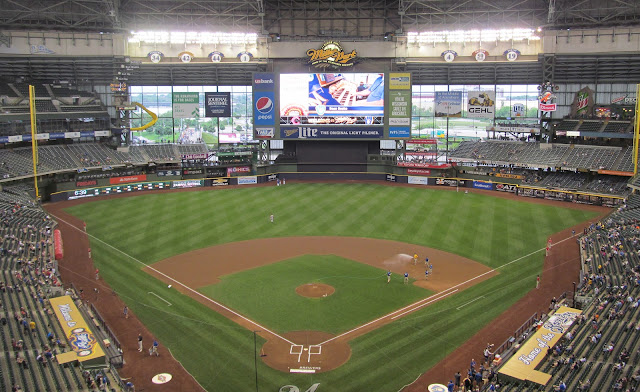 Miller Park from the Upper Deck. 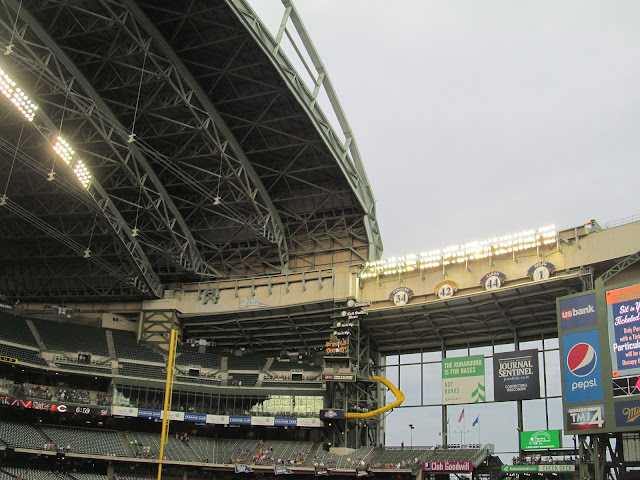 The Roof was closed when we arrived, but was opened just prior to game time. Miller Park only remained an outdoor venue for about 3 innings when oncoming rain forced another closure. 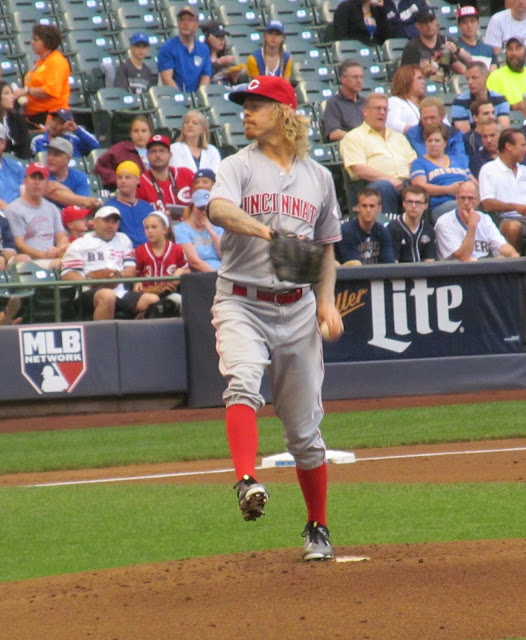 Oh Yeah there was a game.  The Brewers defeated the Reds 9-5. Neither starting pitcher was particularly sharp and both were gone before the end of the 6th inning, although Brewers Pitcher Zach Davies was hurt by his defense.

The Starting pitcher for the Reds was John Lamb, For some reason his look here reminds me of Tyrion from Game of Thrones. Lamb was lifted after just 3 2/3 innings which saw him give up 6 runs. 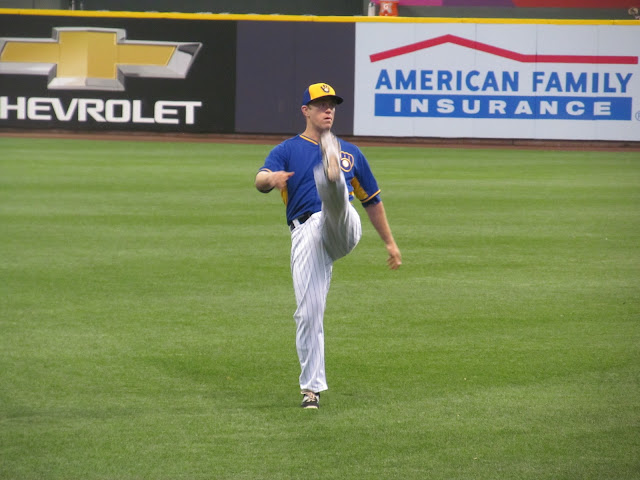 Must of been a good warm up as Hill had a great game with a pair of Home Runs. 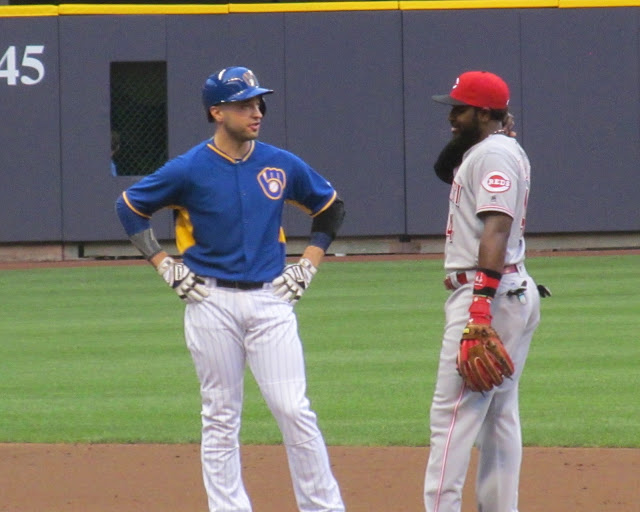 Braun and Phillips are likely discussing their own trade prospects. 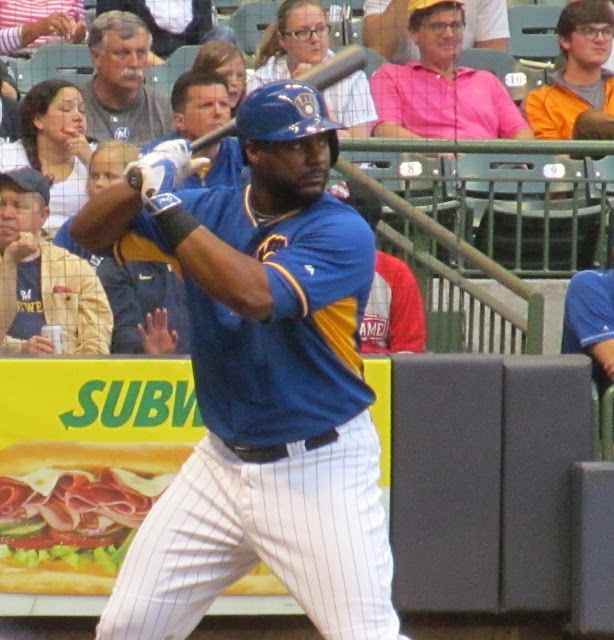 Carter is off to a hot start ranking 3rd in the league in Homers at the 1/3 mark in the season. 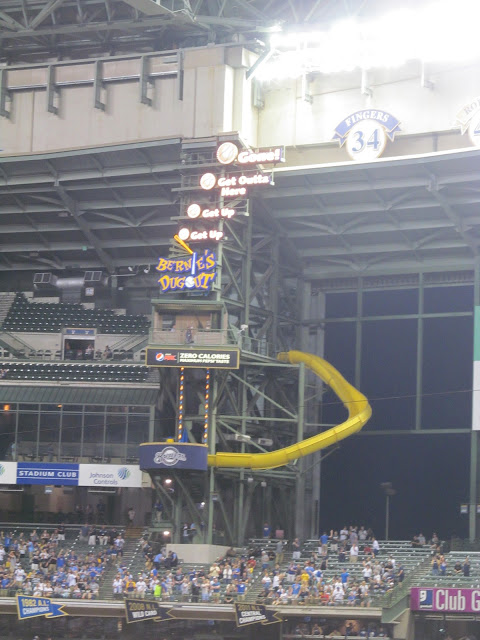 We got to see Bernie Brewer hit the slide, I believe this was on the Aaron Hill's 2nd Home Run. Notice at the top of the picture signs are lit up that say "Get Up, Get Up, Get Outta Here, Gone!" the signature Home Run Call of Brewers Broadcaster Bob Uecker.

There was a lot more to take in at the Brewers game and I have a lot more pictures that I hope to share at some future point.