Over the weekend the Cincinnati Reds Retired Pete Rose’s number. 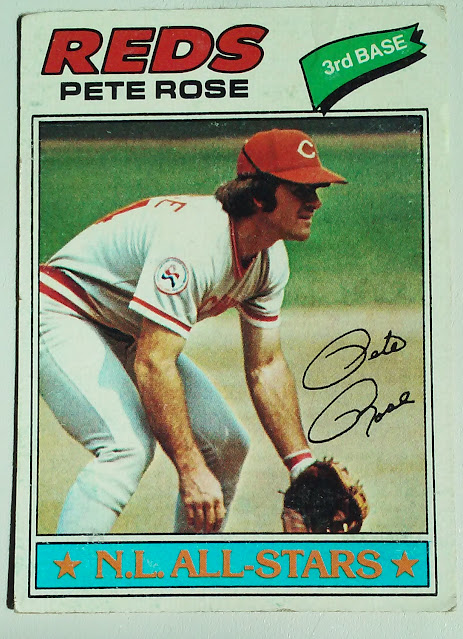 1977 Topps #450 Pete Rose
The Reds drew 40,805 fans for the ceremony and 120K+ for a three game series versus the Padres for Pete Rose weekend.  Outside of an early season Saturday Game against the Cubs and the Home Opener versus the Phillies, the trio of games rank as the Reds top 3 draws of the season.

1976 ASG
In 1976 Pete Rose made his 10th All-Star Team. However, it was his first at Third Base the fourth different position he played in the Mid-Summer Classic. Rose batted leadoff in the game and recorded a single off of AL Starter Mark Fidrych. Pete went 2 for 3 in the game wit the 2nd hit coming off of Luis TIant. After Five innings Rose was replaced at third by the Home Town player and future teammate Mike Schmidt.

Reds alums present for the number retirement ceremony on Sunday included 3 of Rose’s Reds teammates that were on that NL ASG squad in ’76, Tony Perez, Johnny  Bench and David Concepcion. 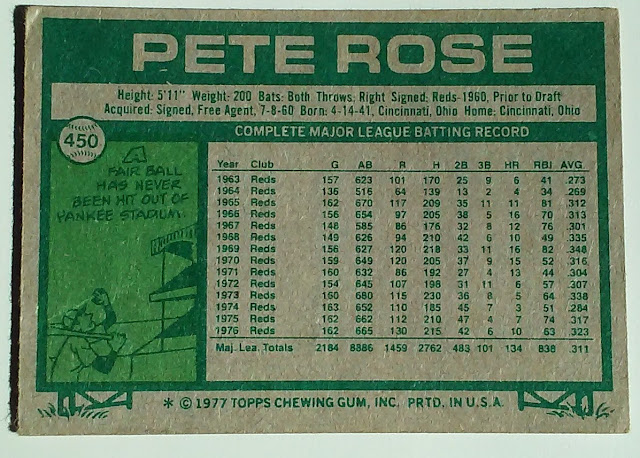 Just wanted to show off the cartoon on the back of the card. As far as I know the 30+ year old factoid remained true until the stadium closed. In 2008 Josh Hamilton came close during the Home Run Derby and there is also a debate as to the possibility of Josh Gibson hitting one in a 1930s Negro League game. For a New York Times article regarding those homers and other long ones at the House that Ruth built click here.