Yesterday we got the news that Phillies Pitching Prospect Matt Imhof suffered an eye injury due to a freak accident during a post game workout. 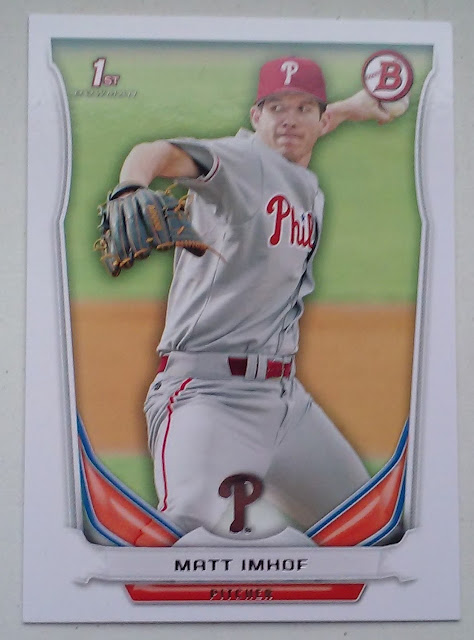 
Imhof was the Phillies 2nd pick (#47 overall) in their 2014 draft which has already yielded Aaron Nola. The 22 year old lefty is currently in his 3rd season as a pro and second at single-A Clearwater.


I get freaked out putting in a contact lens, I can't imagine what it is like to suffer a major eye injury. Hopefully things work out well for Imhof and we get to hear positive things about his health in the future. 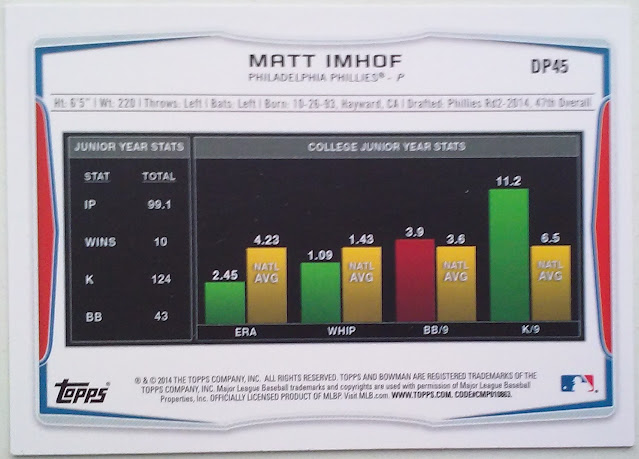 
Interesting graph on the back of these Bowman cards. Imhof's most recent numbers are displayed graphically to show how is collegiate numbers compared with the National Average. The Yellow bars correspond to the averages while the green and red are Imhof's numbers - Green is where he was above average (ERA, WHIP, K/9), Red shows his struggles (BB/9). The data is not sourced and doesn't specify the sample for the National Average, I suspect it is for all D1 pitchers.


The numbers proven to be a good glimpse into who Imhof has been as a professional, He has been able to get batters out while struggling with his control.