30 Years ago on June 18th 1986 Don Sutton and the California Angels defeated the Texas Rangers 5-1.

It was also the 300th career Victory for the Future Hall of Famer. 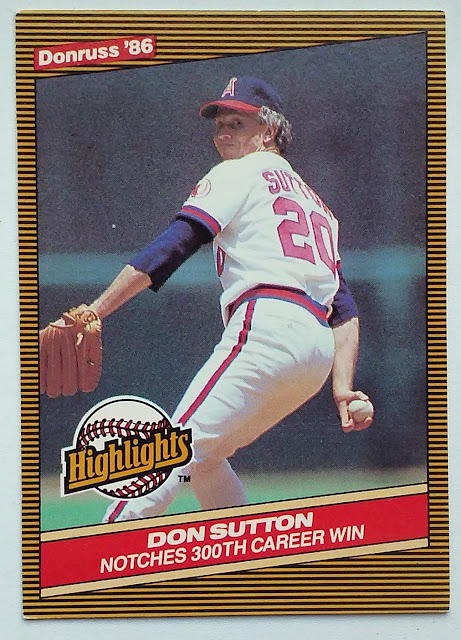 At the time Sutton was in the middle of a mediocre 1986 season. Other than a Shutout of the White Sox a few weeks earlier the win over the Rangers was probably his best pitching performance of the season. In the stellar outing Sutton went the distance allowing only 3 hits and pitching to two over the minimum.

The only blemish on the gem was a 2 out Home Run to rookie DH and future Phillies Outfielder Pete Incaviglia. One of the Rangers pitchers that day was another Rookie and Inky's 1993 Phillies Teammate Mitch Williams.

There was a Phillies tie on the Angels side as well. Don Sutton's Battery Mate for the game was Bob Boone and the Teams manger was Gene Mauch. Other Notable players that supported Sutton were Jayson Werth's Uncle Dick Schofield, Hall of Famer Reggie Jackson. 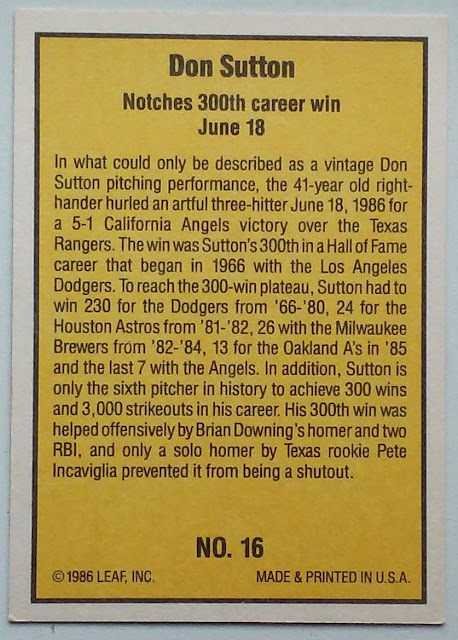 The back of the card gives a nice career and game summary. It was only Sutton's 7th W with the Angels but he would stay there long enough to win 21 more and make California his second longest tenured team.

The doomed 1986 Angels won the AL West but sadly lost the ALCS to the Boston Red Sox in a series that included the Donnie Moore game. Sutton did not pitch in that game but he did make a relief appearance in the final game of the series which was his final playoff appearance.