The Curious Case of Sidd Finch 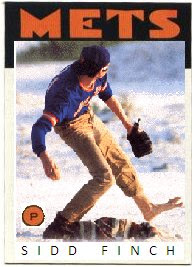 As spring training draws to a close, I would like to take a moment to recognize Sidd Finch. Every once in a while there is a rookie that absolutely lights up the baseball Universe. Some of those players go on to be big stars, like Mariano Rivera or Ryan Howard. Many others never reach the promise of early glory like Andruw Jones, Joe Charboneau, or one Hayden "Sidd" Finch.

Sidd Finch came to Mets camp in the sping of 1985, an odd young man with a blazing fastball. He had no previous pitching experience but Finch had channelled a Zen manta into his body that allowed him to throw a baseball faster than Nolan Ryan.

Perhaps if things had been different, Davey Johnson would not have made the dubios decision to let Finch pitch to Bill Buckner during game 6 of the 86 World Series. Perhaps Finch would not have blown the save on Buckner's three run blast and the young mans promising career could have continued. Finch never returned to baseball after leaving Shea Stadium that night and has been shunned by Mets fans ever since - Many Mets Fans still refer to the Mets forty year World Series drought as the curse of Sidd Finch.

I believe it is time for the Mets faithful to move on. With the opening of a new ballpark bring back Sidd Finch and honor him, perhaps the return of Sidd Finch could reverse the curse.

Had things worked out differently, The Mets would have won the 1986 Series, Finch may have fulfilled his baseball potential, and the 1986 Topps Traded Card 11T above would be worth hundreds of dollars today.

Below is the rather interesting Mets Official Scouting Report of Sidd Finch from 1984. (click to enlarge) 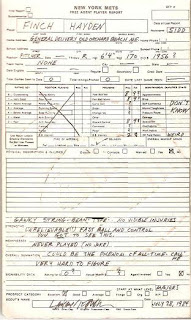 Will you please send me your address at padrographs@live.com. I have some Phillies that want to come stay with you

One of the best April Fool's jokes. I had completely forgotten about this one.

I read this story back in '85 and I believed it completely.