We are a week away from 2014 Topps Heritage, today we bring you one of my favorite cards from the original 1965 set: 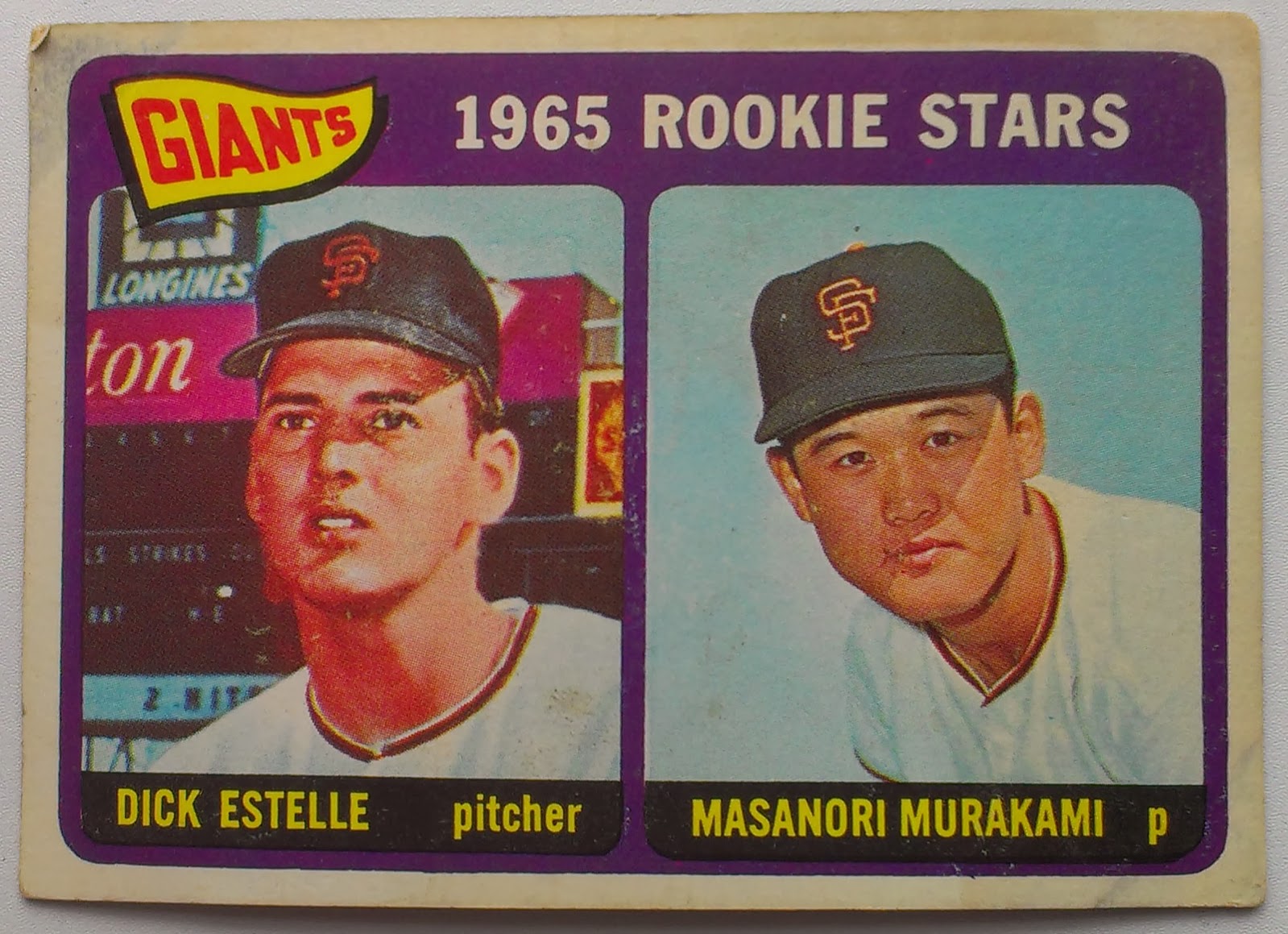 Masanori Murakami was the first Japanese MLB player way back in 1964. He preceded Hideo Nomo by three and a half decades. As a lefthanded relief pitcher Murakami pitched farily well for the Giants. Unfortunately due to a variety of contract issues and failed negotiations between the Giants, MLB and the Japanese League Nankai Hawks Murakami would return to Japan after a mere two seasons in the States.

For further information, I highly recommend this Masanori Murakami biography that I believe was written by High School student in New York City. The Bio- further cites "Remembering Japanese Baseball: An Oral History of the Game" which as it's name infers is mostly Murakami commenting on his career - not terrific writing but an interesting read.

Murakami was honored by the Giants in 1995, throwing out the first pitch prior to a game versus the Dodgers. Coincidentally the LA starter that night was Hideo Nomo who took a no-hitter into the 7th inning, Royce Clayton broke up the Nomo No-No which was the only hit for the Giants.

1965 Topps
I had thought Masahiro Tanaka would have been a great candidate for the #282 card in 2014T Heritage, but Ben Henry as pointed out over at the Baseball Card Blog that Tanaka's signing may have happened to late for Topps to send the card to print.  I hope that Topps figures it out, Tanaka would be a nice bonus for 2014 Heritage.

1965 Topps featured a number of Rookie Stars cards including 3 and 4 player varieties. 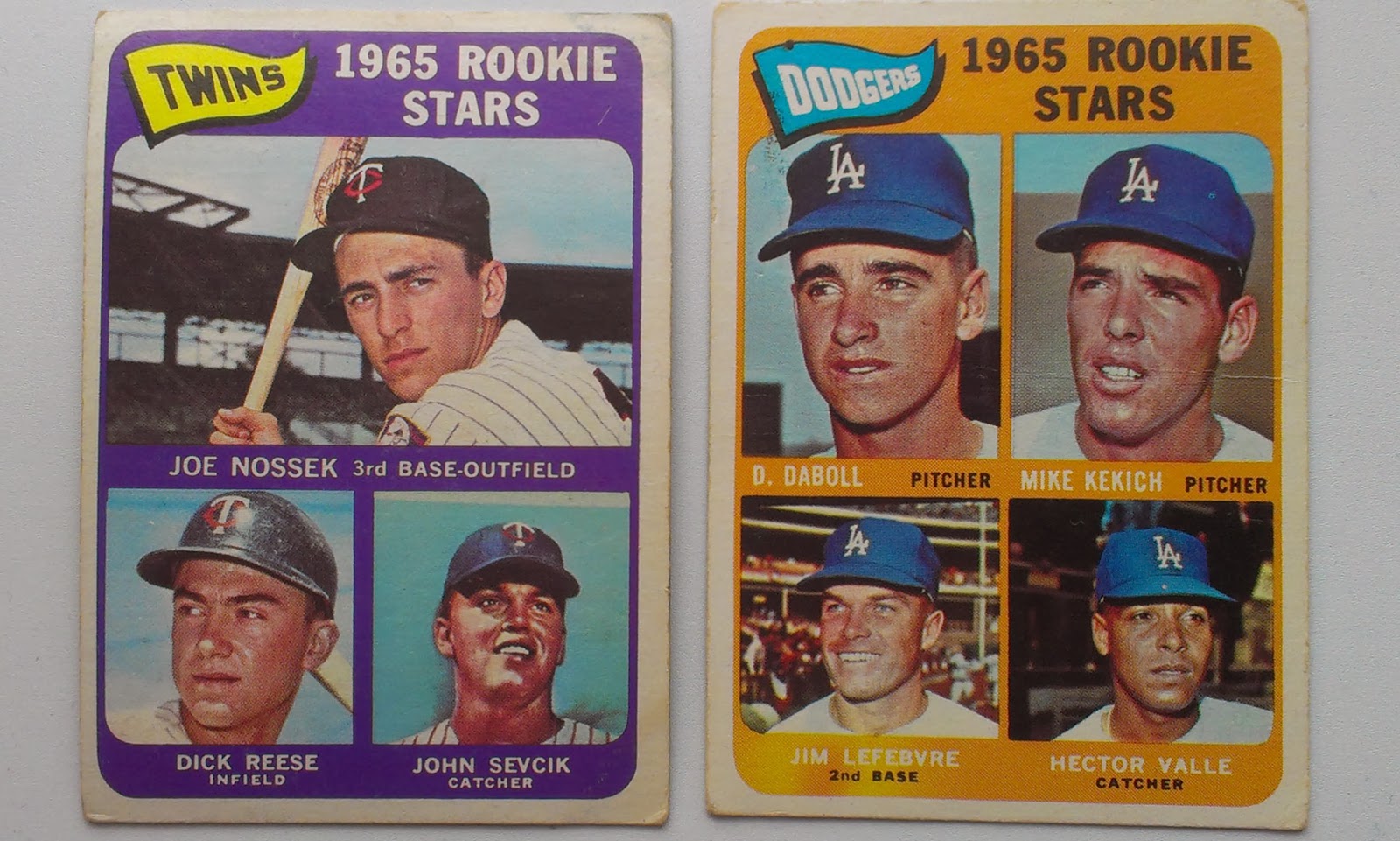 No idea why Joe Nosseck got the prime spot in the Twins card. Perhaps alphabetic order. Rich Reese had the best career of the three Players. As far as the Dodger card, Jim Lefebvre was probably the most successful - in 1965 he even beat out Joe Morgan for Rookie of the Year.

Other Voices
The Great 1965 Topps Blog - Kevin has a lot more info on the Dick Estelle half of the above card.

Not to be a buzzkill, but MLB requires that you actually BE on a 25 man roster before you can appear as a regular card in a set. Since the regular season hasn't started yet, neither Tanaka nor Abreu is eligible. The rules do not seem to apply to inserts, so I suppose there's still a chance Topps will toss in a super short printed 1 in 85,000 cases Tanaka non-rookie card rookie card. Most likely, you'll have to wait for the high numbers set they sell through Topps.com (for $100) after the season.

The checklist has finally been released and Heritage card #282 is a rookie card featuring the tandem of Heath Hembree (Giants) and Kevin Siegrist (Cardinals).

Thanks Stubby, I had not factored in the whole 25 man roster with the Heritage release date issue.