I have been on vacation for the past week and have taken a much needed break from all Net related activities. Thanks for your patience while I sort through some stuff and figure out what I was working on pre-vaca. Today I will open by posting a Faux Blaster. Basically my Faux blasters consist of $20 worth of Hobby Packs of a particular product.

This entry will focus on 2009 Topps Heritage. For my $20 I was able to pick up 6 packs of Heritage Hobby at a recent card show (ok it was a couple of months back - but who's counting).

Here are some of the highlights: 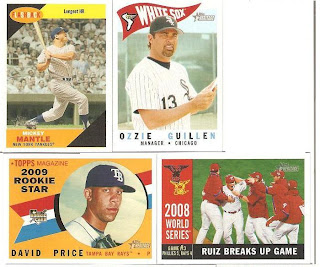 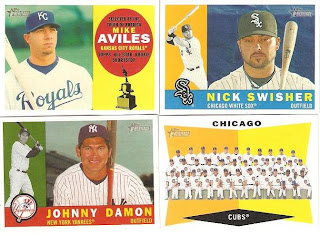 I am particularly fond of the Carlos Ruiz card of course and also the Johnny Damon base card. and here is why: 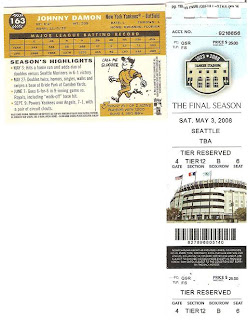 Check out the first season highlight on Damon's card. It occurred at the final Major League game I attended at Yankee Stadium last year. Pretty cool and I get to add it to my Phungo Games collection.

Overall the faux blaster was okay, I came out with a couple of stars but was a little short on inserts and was not lucky enough to pull any big hits - The Swisher card was my sole short print. I did get the vendor to throw in a 70 card grab bag box that contained some good stuff including a few Phillies and a couple of 08 Topps Finest.

And I also cheated just a bit on my Faux Blaster by picking up this buyback card that I spotted. 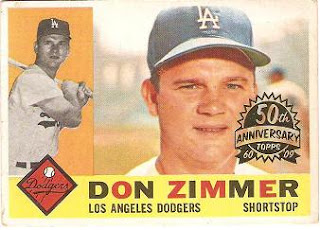 The Zimmer card went for $3 and was in a sheet of other buybacks of lesser known players. The card is in pretty good shape and for $3 I consider it a steal. Don Zimmer is not a Hall of Famer but surely doesn't deserve to be slumming with a bunch of commons.

So there you have it for $23.10 (includes a single of Ronny Paulino as a Phil out of a dime box also) I have picked 50 2009 Topps Heritage cards. The only Phil I recieved other than the Paulino was the WS Highlight of Ruiz. Including tax, a 2009 topps Heritage retail Blaster would typically run $21.59. For hobby I consider these 6 packs a little disappointing simply for being short on Phillies and running below expected on the insert ratios, but finding the Zimmer card makes up for any issues with the rest of the content.

I will be catching up on things the next week or so (and maybe sneaking out to a card show today) but should be back with a Phungo 5 sometime next week.
Posted by deal at 1:06 PM

Awkward spot for the buyback stamp (which I dislike anyway).

I'm sending you an email about the Zimmer buyback - I really need that for my www.collectingzim.com collection! I'll put together a super Phillies package for you! b_wackerlin@yahoo.com