Rod from Padrographs ( a recent Phungo 5 participant) was good enough to send me over some extra Phillies he had in his collection. Among the cards was a giant card of Padres and Phils favorite John Kruk, several Sportsflics cards, retro cards of Phillies past like Robin Roberts and Richie Ashburn, some 2008 and 09 cards and a couple of 2000 Topps which I am extremely short on and real glad to have received. 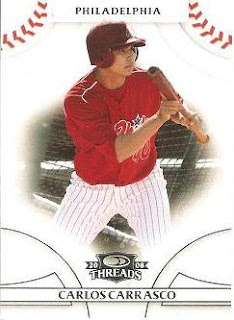 I love this card, 1 Carrasco is pretty decent Phils prospect and 2 I have a fair chunk of this set and am considering collecting it. That being said, this card has always intrigued me, if your Donruss and you don't have a lisence why do they screw up the things that they can control? Carlos Carrasco is probably the highest ranking PITCHING prospect in the Phils system - yet they show him bunting. That is weak. I think Threads is only a 100 card set - lets put some effort in guys. 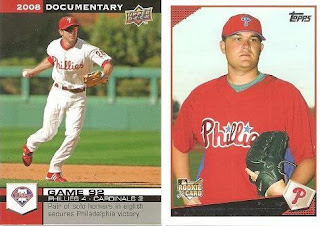 Rod also sent bunches of new cards. I don't believe that I have any Documentary cards, but I would like to collect cards of all the Phils games I was at during the 08 season. Unfortunately game 92 wasn't one of them. Game 92 played on July 9th 2008 was a 4-2 victory for the Phils. Chase Utley, pictured, did play in the game and went 1-3 with a walk and a single. Of course UD could have featured Ryan Howard or Pedro Feliz who both homered in the 8th inning.

A few weeks ago I busted open a blasters worth of Hobby Packs of 09 Topps and came up with very few Phils so the Drew Carpenter card is a welcome addition. 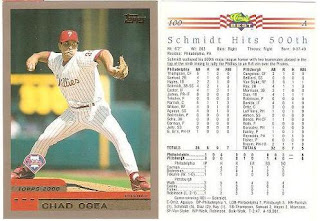 The 2000 Topps set is likely the modern Topps set I have the least amount of Phillies from and I was very happy to see that this Padrographs lot included several of these. The other card is from 1992 Classic Best, I have included the reverse of the card because it features a box score. I am always a fan of cards that feature game stats and it is pretty cool to have a document of the game in which Mike Schmidt hit his 500th Homer.

Big Thanks to the Padrographs crew for sending out this bundle of cards!
Posted by deal at 2:03 PM