On Monday, amazingly Night Owl Cards and I got through the Phungo 5 interview without mentioning Manny Ramirez. In Fact on Sunday and Monday Phungo featured back to back posts on the Dodgers without menitioning Manny. I am quite proud of that, but all good things must come to an end. 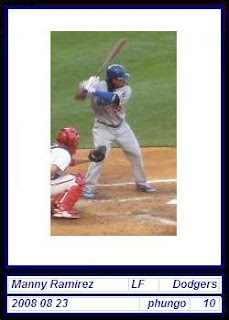 This is actually one of my favorite Phungo cards. I have seen Manny play many times, and I am sure that he has been quite a hassle for Phils and Orioles pitching in many of those games. But I have always enjoy watching him play. I have seen him homer in big spots and smash dingers as hard as anyone including Ryan Howard. He is likely the only non-Phil I have ever seen homer for 3 different teams. I have seen him hit a playoff homer, He is in the Phungo grand slam club, and on a Friday night back in 2001, I distinctly remember a Randy Wolf offering that he absolutely smashed the cover off. It appeared to me that the ball was still rising when it cleared the Monster. Simply amazing.

And to be honest, I don't really feel cheated.

I don't feel cheated by Bonds, Manny, McGwire or Clemens or lesser lights like Ryan Franklin and David Bell. The moments were great the memories are good and really the steroid news both expected and unexpected doesn't really shake me.

As an adult I have never been a competitive athlete in any organized sport above a club level, so I really cannot speak from that angle. I have friends and acquaintences who have engaged in sports at a collegiate level and those are the people that I believe are qualified to have the biggest complaint. They don't know, and doubtful they will ever know, if the people and teams they competed against were ever playing fairly. One can follow that line of logic to asking if they could have played at a higher level had the playing field been even. That can be a huge unanswered question for someone who has devoted a lifetime of effort in pursuit of athletic excellence.

Moving on, the Manny card is #10 in the Phungo series, which I assigned as a hero number. His Dodger number is 99, which is well above the series high card (#64). I have the specific position of LF for Left Field and the Photo was taken on August 23rd of 2008, Game 2 of a 4 game sweep of the Dodgers by the Phillies.

I cropped the photo to fit the card better, for a larger (also cropped) shot and an early Phungo write up on this game click here.
Posted by deal at 1:51 PM