This past Thursday marked the 50th anniversary of Roy Campanella night. A car accident left Brooklyn and Los Angeles Dodgers catcher Roy Campanella paralyzed. In support of Campanella and his family the LA Dodgers and New York Yankees played an exhibition game on May 9th 1959. 93,000 fans attended the game.

The anniversary is being marked by a program on MLB Network on Monday Night May 11th.

I could not find anything on the MLB Network's woefully underwritten site, but found several blog postings on the show including this one one by Tom Hoffarth of the LA Daily News. 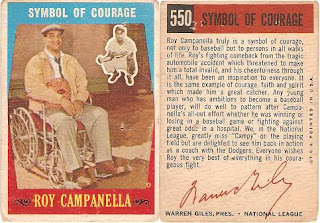 Topps also recognized Roy Campanella in the 1959 high numbered series. As far as I know it was the first time Topps had created a baseball card that marked a baseball related tragedy. Since then Topps has issued several cards of players that died during there playing careers. One recent example was of former Phil Cory Lidle who perished in a plane crash in 2006.

In my opinion this is a great card to have in any novice vintage collection. In a recent ebay auctions a couple of these ungraded cards in fair condition (about same as card pictured) have sold for $6.75 and $11.22. Higher quality graded cards have sold for $37 - $50.

As always the Phungo quoted prices include shipping and handling charges.

You're right - that is a great card. Did the Dodgers do anything?