Phungo 5 with Cards on Cards

The Phils are on the road for a couple of short series this week, the first of which features the Red Hot St Louis Cardinals. For Phungo 5 we are checking in with Cards on Cards. ConC is based out of Portland Oregon and also covers the upstart Portland Trail Blazers and was also good enough to send me a great lot of Phillies Minor League cards earliar this year. We cover a good bit of ground here including some Cards past and future and the quirky band "They May Be Giants" 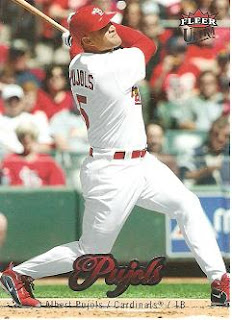 1) St Louis is hosting the All-Star Game this year, Do you know of any interesting events the Cards are planning to give it a St Louis Flavor? Anything special you would like to see the Cardinals do? and Do you think they will bring back Mark McGwire for the weekend?

I’m not sure of all of the details, but I know that many former players have strong connections to the team still and they are often brought back for smaller events. I could see a huge group of former Cardinals on hand for the festivities. I know that Pujols is going to be at the center of a lot of what they’re doing. I don’t know about McGwire coming back. If he’s involved, I’m sure it will be very low-key. I find it interesting that you asked that because I was just reading a discussion the other day about how McGwire was a player who seemed to be a lot more popular with casual baseball fans around the country than he was with the St. Louis fanbase itself. I have a lot of mixed feelings about the guy as I’m sure many Cards fans do. I do know that he does seem to be a pretty nice guy, all things aside.

Phungo: This is interesting - I had not known that there was such a ambivalent reaction to McGwire in St Louis. Oddly this is just the opposite of the opinion on Barry Bonds, who is still fairly popular in San Francisco, and generally disliked outside of his home city. Perhaps because the Cardinals won a world Series without McGwire (and a more notable first baseman) St Louis fans have moved on.

2) I have Brett Wallace on my Fantasy squad - is he the real deal and just blocked? Are there any other Cardinal prospects that you woud consider their Autos a good investment.

Brett Wallace is a big-time hitter. I think he’ll find his way onto a team somewhere and at some position, too. I don’t think you’ll see him before September call-ups because the organization likes to work players in slowly, and it wouldn’t surprise me if he didn’t see any big league time at all this season even with Troy Glaus’s season a big question mark at this point. I’m sure it’s far too late in the prospecting game to get in on Colby Rasmus. Watch out for Daryl Jones, especially if Rick Ankiel doesn’t stick around.

3) Is there anything going on with the Portland Beavers that we need to know about?? I saw that Kyle Blanks swinging the bat in spring trainging looks like a real monster.

The Beavers seem to be in this sad state of being the split squad San Diego Padres these last couple of seasons. So many of their players seem to float up and down because the Padres have just been atrocious going back to the beginning of last season. I know they’re pretty big on Blanks. They had an even larger guy a few years back named Walter Young, but I would hope that Blanks will turn out more useful than he was.

4) From your profile, I see that you are a "They Might Be Giants" Fan. what song would you pick for their "request a cover" segment?

I think it would be fun to see them do a Queen song or just some really bombastic arena rock. Basically anything but Bohemian Rhapsody.

There’s only one true answer to that. As a Phillies fan, I think you should be a Yadier Molina fan by proxy, with what he did to the Mets in the 2006 NLCS.

Yep - always good to work in a dig on the Mets - 5 out of 5 for Cards on Cards, Thanks for another batch of terrific answers. Good to hear the optimism on Brett Wallace, Queen was a great choice for TMBG I wonder what they would do with Bicycle Race?

For a look back at a previous Phungo 5 Click here to find out whats going on with Sports Locker.

And we are looking forward to a future Phungo 5 with Waxaholic.

Email ThisBlogThis!Share to TwitterShare to FacebookShare to Pinterest
Labels: Albert Pujols, Cardinals, Cards on Cards, Phungo 5, They Might Be Giants