This week the Phils face the Dodgers for the first time since the 2008 NLCS. To find out whats going on with the Dodgers we called upone the wisdom of Night Owl Cards. NOC covers a wide range of topics but centers around two areas, Cards photographed during night games and the Dodgers. I also enjoy the early 70s vintage on Night Owl's site. Night Owl was also an active participant and runner-up in the Spot The Sig! competition. Team Phungo thanks the NOC crew for their participation and would like to let everyone know that we are in the preliminary stages of putting together some interesting stuff for Spot The Sig! series 2 in the fall.

1) Night Owl Cards features many in depth posts - on many varied subjects. Which takes longer finding the right cards for the post or writing up the copy?

Oh, probably writing up the copy. Since I’m an editor by profession, I’m particular about the way things are written, and I get paranoid that people who know I am an editor will see grammatical issues and call me on it. So I have to go over what I’ve written a few times. Plus, I like to give readers something to think about, so it takes some time to decide how to write something. As for finding the cards, I have a lot scanned and on file. But when something comes up unexpected, and I have to dig up a bunch of cards, that can be a royal pain in the bum.

2) There is a lot of talk about the Mets new stadium homaging Ebbets field - as a Dodgers fan on the east coast does this pique your interest in visiting the stadium?

It’s a little unsettling to me that the Mets are paying homage to Ebbets Field/the Brooklyn Dodgers. I’ve come across a lot of Mets fans. I don’t know many who are Dodgers fans. A bunch of them hate the Dodgers. I know back when the Mets first began that a lot of Brooklyn Dodgers fans became Mets fans. But that’s not so much the case anymore. So, nah, it wouldn’t make more interested than going to any other new stadium.

3) The Dodgers have a mess of quality young hitters (Kemp, Ethier, Loney) who do you think will ultimately emerge as the best of this group.

Oh, geez, it’s Matt Kemp. When he puts it all together – and I hope that’s “when” and not “if,” he’ll be a flat-out star. You’re already seeing what he can do a bit more this year. 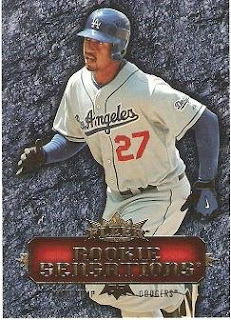 4) Who will be the Dodger players of the game for each of the three games in the Series - and give me one Blob - Phillie or Dodger.

For the blob, Tuesday, it’ll be Matt Stairs, because I hold a grudge. Wednesday, it’ll be Russell Martin ‘cause I think the Phillies will win that. Thursday, I’ll go with Pedro Feliz. He’s an ex-Giant.

5) Are you a believer in the Tommy LaSorda Slim Fast Diet?

Have you seen Tommy the last few years? I don’t think it’s been working for awhile now.

Another fun and informative Phungo 5. Kudos for bringing up Randy Wolf. He is a Phungo house favorite and we are looking forward to seeing him back in town. I will award a 4 out 4 to Night Owl Cards for this one with the point for question 4 pending the blob predictions - I personally like Ethier he is a bit steadier for my tastes, but Night Owl is correct, Matt Kemp definitely looks like an every year All-Star in the making. The Dodgers should be a competitive club for several years and I am happy the Phils took advantage of their opportunity in 2008.

Thanks to Night Owl Cards for this weeks Phungo 5. If you want to look at a past Phungo 5 click here and you can find out what Waxaholic had to say about the Braves.

Thanks for the interview. Have fun at the game!