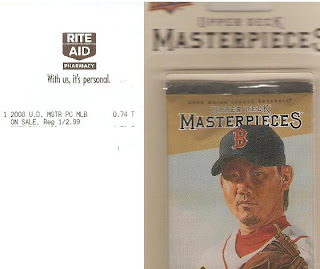 I am not sure if this is going on at all Rite-Aids but my local one is selling 08 UD Masterpieces packs at 75% off - thats 74 cents a pack - If there was 15 cards in a pack that would be the same prices as when I was a kid. It looked like they had other card packs on clearance as well but those were all sold out.

Unfortunately, there are only 4 cards in a pack and you can probably find these cards in dime bins so these packs are still likely overpriced, but I figured it would be fun to bust a pack. If anything good comes out of the two packs purchased team Phungo will be sure to let you know.

In other news Tom Verducci over at SI (and of MLB network) has jumped on the All-Decade bandwagon. He has listed the statistical leaders of the Oughts along with his All-Decade team. Earliar this week we at Phungo listed our Phils All-Decade team - Night Owl also posted an All-Aughts Dodgers team.

I am a little disgruntled that Tom mentioned the Cardinals as a potential team of the decade because they have a shot at winning 2 World Champions in the decade (tying the Bosox) - but he excluded a certain favorite team of my own. What about them Phils Tommy??? they have a shot at 2 WFCs too!!!
Posted by deal at 5:57 PM