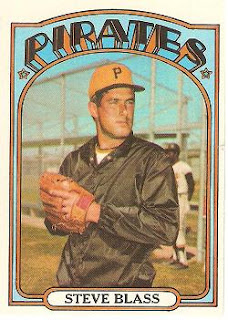 Steve Blass was in the news recently for knocking in not one but TWO HOLES-IN-ONE during a Pittsburgh Pirates Alumni Golf outing. Golf Digest estimated the odds of accomplishing the feat as something similar to hitting the Powerball Lottery.
Blass pitched a short time before I really was conscience of baseball, but from what I understand he was pretty impressive for a few years including winning game 7 of the 1971 World Series against the Baltimore Orioles. Blass Outdueled Orioles starter Mike Cuellar for a complete game 2-1 victory. A replay was featured on MLB or ESPN Classic a few months ago - it was quite riveting.
But this all changed in 1973. Steve Blass literally Contracted/Developed/Discovered Steve Blass Disease.
Wikipedia refers to the condition as follows:
"The diagnosis is applied to talented players who inexplicably and permanently seem to lose their ability to accurately throw a baseball"
I am curious as to why this and similar conditions are particular to baseball. We have seen it happen several times recently and notably to Rick Ankiel during the 2000 NL playoffs. Fortunately for Ankiel, he is athletic and talented enough to be able to stay involved in baseball as an outfielder. There have been several other examples - I believe it ended one time Phil Kevin Saucier's career. Mark Wohlers career may have also been derailed by a condition similar to Blass's - Macky Sasser as a catcher for the Mets developed a condition where he could not make the return throw back to the catcher. Chuck Knoblach as a second basemen for the Yankees was unable to consistently make a throw to first base and once famously hit Keith Oblermann's recently passed mother in the stands.
Why does this happen in baseball but not other sports. Maybe there are examples from other sports, but I can't think of them. Or is it just that if it happens in another sport the athlete is simply deemed as ineffective or aging and there career ends?
I was trying to come up with the equivalents for other sports:
- Has a 90%+ foul shooter ever suddenly just lost his ability to get the ball near the basket?
- How about a golf equivalent - I remember seeing John Daly being unable to putt but that was a withdrawal scenario.
- I am not sure that Football and Hockey really have any situations that would lend themselves to examination - perhaps pass catching.
- Perhaps Tennis - Has there been a case of a good player all of sudden having a complete inablity to get a serve in?

Regardless of all this Steve Blass had a pretty decent career and was on the winning side of a World Series thats nothing to complain about, and neither is a pair of Holes in One.