Saturday was a great day for a game and the Phils were on the road so I ventured down to Camden Yards in Baltimore to catch the Orioles hosting the Rangers.

The O's are fielding what one would think is a pretty forgettable team and are attempting to not suffer a hundred losses. As dreadful as this sounds they are not awful to watch - in fact since there is no one at the stadium, it is a good opportunity to catch some of their young talent which will hopefully help the O's compete in the future.

The Texas Rangers are potentially playoff bound and feature a good mix of young talent and some veterans. Sadly Josh Hamilton is on the shelf and was out of the lineup.

After a rough start Matusz settled down and managed to pitch 6 good innings after a shaky 3 run first highlighted by a David Murphy home run. For the game Matusz gave up 4 runs over 7 innings on 6 hits and only 1 walk. It was good enough to give the O's a 5-4 Win. Former Phil Kevin Millwood did not pitch nearly as well - first he could not hold the 3 run lead that the O's spotted. Millwood would leave after only completing 5 innings and giving up 5 runs.

The Offensive highlights were provided by long time Oriole Melvin Mora who was 3 for 4 with a Homer and 3 RBIs. It may be Mora's last great game with the O's. 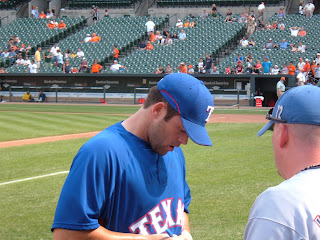 Good Guy Awards go out to the Rangers Derek Holland, Julio Borbon, and I think this is Michael Young who were all spotted signing autographs. Robert Andino signed a few Autos on the home side.

It was Negro League Recognition Day at Camden Yards and the Widow Hall of Famer Leon Day (foreground) threw out one of the ceremonial first pitches. 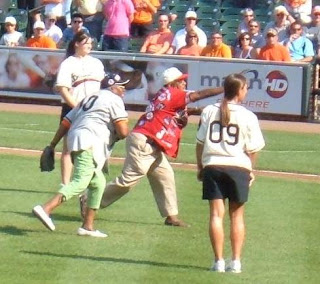 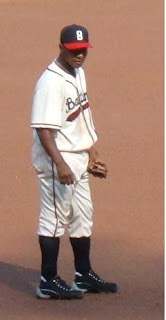 2009 09 05 Melvin Mora
Melvin Mora was the offensive hero of the day. As part of the Negro League Celebration the Orioles wore the uniforms of the 1949 Baltimore Elite Giants (Pronounced E-Light) 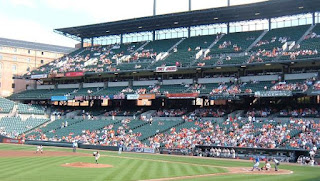 Good seats for everyone. The payed attendence was a shade under 18,000 but I am not sure that half that many actually showed up.
Posted by deal at 7:53 PM

That is pretty cool that they had Leon Day's wife throw out the first pitch.

Are you sure that is Michael Young? I know it is an awkward angle, but I'm not seeing it. But, I could be wrong.

Either way, looks like you had a good time.

No I am not sure it is Young. It is likely a pitcher then.

It's great when they honor the negro leagues and teams of the past.

The Os and Rangers have some good young players. That would be a fun game to watch.

That's not Michael Young. Could be Tommy Hunter.