I have posted a few Sloppy Topps in the past, today - in the interest of equal time I am posting an Upper Dreck entry.

And, yes, I know poking fun at Yankee Stadium Legacy is like picking on the Mets injury depleted 2009 lineup - but it is still fun.

The two budget packs I picked up at Rite-Aid yesterday were basically uneventful (8 base cards - no Phils) but the YSL was an interesting Yogi Berra card. 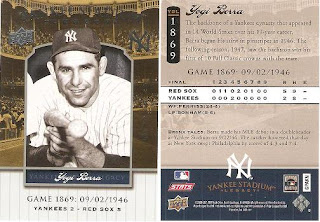 This is perfectly fine card featuring a Hall of Famer and a game the day of September 2nd 1946.

Since the featured game is from 1946, I can't even check Baseball-Reference to see if Yogi played that day. Of course I could read the Bronx Tales - click the picture to enlarge and read, sorry it may be a bit blurry. Notice anything odd. The card represents a game on September 2nd 1946 however, YOGI BERRA DIDN'T EVEN DEBUT UNTIL SEPTEMBER 22nd!!!

Ugh. Aren't insert sets supposed to be special or something?!?! - Like I said there is not much joy in poking fun at this set. I realize it is a large set and a lot of work to create - still it would of been nice for UD to at least show something on the effort end.

All this being said, I am still chasing the two specific UD YSL cards that represent the two games I saw at Yankee Stadium. The first card I chronicled in this post regarding a botched ebay bid. The other card is for the game played May 3rd 2008, which would be among the 2009 UD inserts.