We are coming down to the end of the regular season, and it is getting time to start looking at Magic Numbers. Two years ago the Mets had a seven game lead with 17 to play and was unable to win a pennant, so we know that nothing is given. 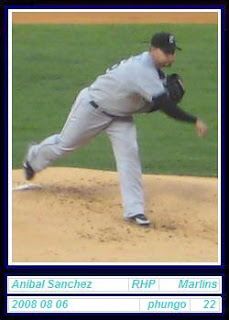 The Phils and Marlins split a double header yesterday. In the second game of the DH Anibal Sanchez pitched very well holding the Phils lineup to 2 hits and no runs over 8 innings as the Marlins took the game 3-0.

The photo for this card was take on August 6th of 2008 during a game in which the Phils shutout the Marlins and Sanchez 5-0. Sanchez has been injury plagued and inconsistent but yesterday he showed that he still has the stuff that allowed him to pitch a no-hitter in 2006.

Fortunately the Phils scored 9 runs in the first game and Joe Blanton put together another fine start to enable the Phils to reduce their magic number to 5.

Tonight the Phils and Marlins play the final game of the quick 3 game series. Hopefully Cole Hamels will have his good stuff as he faces the Fish and Rick VandenHurk.
Posted by deal at 5:55 PM