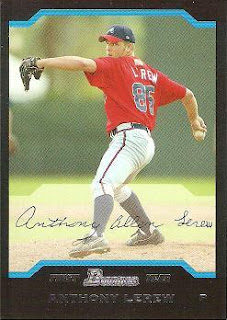 I am sure this news will barely blip most places outside of KC, but Anthony Lerew is starting a major league game for the first time in two years tonight. I just wanted to note it here as Lerew is the only player from my high school that has ever played in a major league game.

Lerew was at one time a prospect in the Braves organization, but has been plagued by injuries. Hopefully he can get his career back on track as a Royal.

So in addition to cheering for the Phils tonight, I will also be pulling for the Kansas City Royals.
Posted by deal at 5:55 PM

I'm a Roylas fan and when I heard the matchup tonie even I asked who this guy was! Lets hope he does good. I'd like to have another option for tohse fourth and fifth starter spots!

Glad to have you onboard tonight Phungo! I hope he surprises some people.

Doesn't look like things worked out real well for Anthony - by the box score I am guessing he had trouble getting the ball over. Those damn Sox always make you throw strikes.