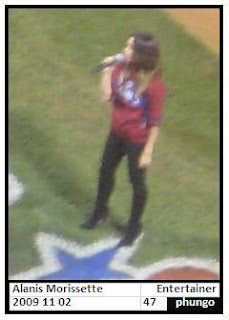 If you were watching the Grammy's last night (I doubt the cross section was high) you may have caught Beyonce singing one of her songs. During the number she segued into Alanis Morisette's "You Oughtta Know".

As with 2009, this years Phungo Cards also include several non-baseball subjects. Alanis was among then. She sang the National Anthem prior to game 5 of the 2009 World Series. I have seen many Anthems prior to games by singers/entertainers of all types. I was happy to see Morrissette perform the Anthem that night - I think of her as more singer and songwriter than as a celebrity, although she has had a pretty decent career as both.

Couple of interesting unrelated stories I came across today. First off Blue Heaven has a schedule up for the Caribbean World Series which will be on MLB network starting on Tuesday.

Word is that Phils Prospect Antonia Bastardo has pitched well in the Domnican League. Not sure if he or his team will be involved in the Caribbean Series but we will keep our eyes open.

The other link I found was featured on Deadspin, and talks about replacement players from the 1994 MLB/players strike and the impact of Scab players on video games.

There are a couple of prominent past Phillies that were affected by the policy - Cory Lidle who died in a plane accident shortly after the 2006 season, and Paul Byrd, who pitched a few games for the 2009 Bosox.
Posted by deal at 9:53 PM

I must be a rarity. Love baseball and love everything to do with music, including the Grammies. I was watching.

Nice find with the article on the replacement players and video games.