Phenomenal Superbowl. Anytime the underdog puts up a fight and your not rooting for the favorite it's a good game for me. Drew Brees was just about perfect - The Saints D came up big when it had to and the Colts made just a few mistakes and that was the difference.

OK recapping results of the The Challenge - There were a total of 9 cards posted 7 of which were solved:

YSL Thurmun Munson - by Rod over at Padrographs (2)

Rod got it for a different reason then I intended. The clue for this one was Baseball-Reference which refers to the Yankee Stadium that the YSL set celebrates as Yankee Stadium II - so that is how I arrived at the 2. 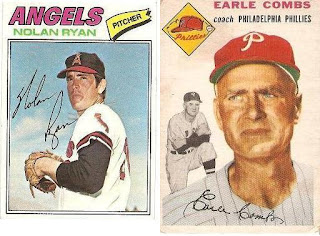 That Leaves Nolan Ryan and Earle Combs. In Hindsight Combs was likely a poor choice.

So here are your clues for these two. I will give you till Noon tomorrow.

The Ryan Answer has something to do with Family Feud and a Career record he holds.

The Combs Answer has historical signficance - Earle is believed to have been involved in a historic baseball first.
Posted by deal at 10:17 PM

Pat Searcher is correct on Combs. He is the first player to where a uniform number which was a 1 which looks like and I which represnets a 1. That is a bit circular and I didn't realize it right away or else I would of bypassed that one.

Nolan is still open - think about Family Feud when you miss.

For Nolan Ryan -
mmmrhubarb is the closest as far as Thought process to what I was looking for. PatSearcher closest in number.

ok it was a stretch. but it made sense in my crazed blizzard shutin brain