In all I picked up 5 packs of Topps and had mixed results. Here are my thoughts on the five packs. I have posted a full break of the first pack previously.

My Biggest complaint is I had to get all the way down to pack #5 before getting a Phillies card. 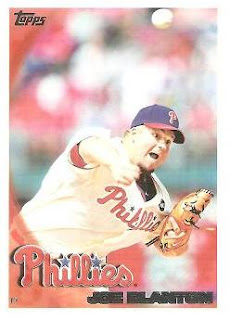 Generally I think it is a plus to get the ball in an action shot, but I think there is to much wasted space in this shot. Regardless it is good to get the first Phil of the year. It appears Blanton will be the Phils 3rd/4th starter for the next few years and he seems like a good player for the role.


It's a Hit = Photography 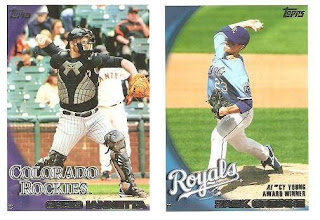 Despite my above complaint on the Blanton Photo, I think overall the quality of the Topps photos is good and there are many interesting shots, including this pair. The Greinke shot is worthy of a Cy Young award winner.

It's a Hit = Landscape Cards 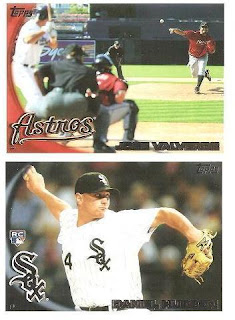 I usually prefer the portrait cards - but for this years edition the Topps design works well for the landscape variety. I am not a fan of Jose Valverde - he is a bit to demonstrative on the mound for my taste or else I would consider this the best photo of the lot.

The swoosh on the side of the Hudson card flows right into his pitching motion and makes for a cool looking shot. 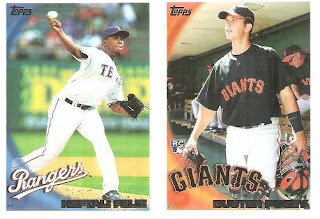 I am not a big fan of the new rookie logo. I think the Red/White/Blue color scheme clashes with that of many of the teams. I am not sure why Buster Posey qualifies for the logo, while Neftali Perez does not - and the Perez card would actually handle the RC logo pretty well. Placing the Rookie logo at the same spot on every card is also a mistake.

Going forward I think the Rookie Card Logo is going to clash with a lot of designs. I am definitely thinking it will not look good on Heritage.

One last note, I ended up with five or six Rangers between the 5 packs. 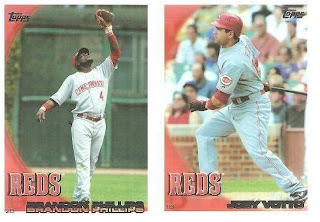 I think both of these Reds cards were photographed on the same dreary day in what appears to be Wrigley Field. I would like to hear an opinion from Nahcos Grande, but if all of the teams shots appear like this, I think I would be a little disappointed. Everything is just to dark. The Brandon Phillips card has the added problem of the mis-stamped foiling.

Between the five packs I picked up 11 base cards had the problem with the foil. I expect to have a future post detailing that further.
Posted by deal at 11:32 AM

Agree on the RC logo. I think they should be gold as the Topps rookie team gold cup trophy.

yep that may be why I didn't mind the old logo that much - it was larger, but the color was in the same neighborhood as the old Topps Trophy logo.