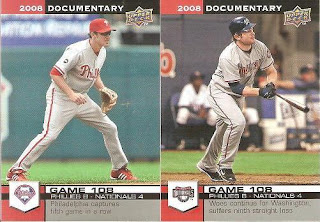 
I am the only person on earth collecting UD-Doc. But I am only collecting the two dozen or so cards that are related to games I saw during the 2008 season. Since this set is so large, finding individual cards is the equivalent of finding needles in a haystack. As you know each card is related to a specific game during the 2008 season - Of course each game features two teams, therefore each contest also has two cards.

I do have a dealer that is a regular at my mall card shows that will often have a couple of the Phils versions of UD-Doc. But he understandably doesn't carry the cards that feature the team the Phils faced during a given game.

Special Thanks to Steve who was able to find a couple of the cards from the opposing teams including the Nats one above.

These cards represent a game from July 31st 2008. Often we plan a baseball related activity for my Birthday which happens to be on July 31st. In 08 the Phils were at the Nats new Stadium in DC which provided a great opportunity to catch a Phils road game with relatively little travel.


The Phils won the game and the series easily. Several pictures for the 2009 and 2010 Phungo Card set were taken during this birthday trip to Washington. Like many of these Birthday Baseball Trips it was hot and muggy but it was very enjoyable.
back to the cards...

Never mind the fact that the Card represent a Nats home game, but the card pictures the Nats playing an away game at the Metrodome. The Utley card is in deed an away game for the Phils and could possibly be in Washington, could also be Cincinnati or a variety of other venues I am sure. For both teams the game is #108. The backs do seem to mesh up. UD got some information on the Washington card wrong (on the right). Orr played Shortstop for the Nats that day. Nice job Upper Dreck. 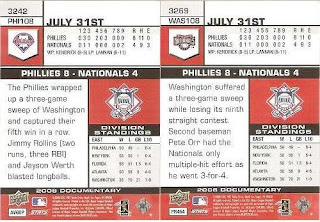 You have no idea how long those were in a pile waiting to be mailed to you. They kept getting buried.

The only collector of UD Documentary?? Don't believe it!

You're not the only one collecting these. I am working on the Rangers team set.