Interrupting the parade of 2010 Topps articles for this Trade Posting. Collective Troll and I had a relic swap and added some other cards to the mix.

Captain Bacon was good enough to send over a bunch of 2008 Heritage: 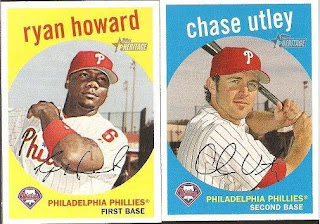 Thanks to Collective Troll as well as several other contributors I have been able to knock down my 2008 Heritage Want List significantly since delving into this only 3 months ago. I am building the set through #425 and currently only need 29 more cards (93%).

There were also several Phillies star cards in the Troll package including many from different Heritage/Retro sets. 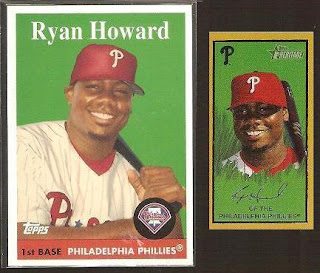 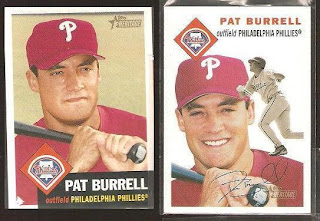 Now that he is no longer a Phils player, it feels like all of the Burrell cards are Retro Cards in some way.

And finally the Relics. 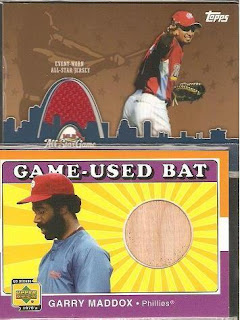 I like the design of the Victorino Relic. I have no idea what the St Louis Skyline looks like but I think this is a decent idea for an all-star card - even if on the flip side it states the card is "Event Worn"

I have started a Garry Maddox player collection, which I have yet to cover on this blog, but will at some point. Finding Autos and Relics of players like Maddox who played pre-1990s and were very good but not Hall of Famers is a task. This is one of the few, possibly only Garry Maddox card that contains a relic.
Posted by deal at 2:06 PM

Nice! I player collect Danny Tartabull (80s,90s), Billy Pierce (50s, 60s) and finding jersey relics of them is impossible... Good luck on finishing off the set! It will look great next to your '59 set!