This is no longer news for the rest of you, but it is for me. I finally got my hands on My First Pack of 2010 Topps yesterday. I bought five packs, this is pack number 1. It is a retail pack that I picked up at the local bargain chain store Five Below (everything is $5 and under) The Pack went for $2.11 including PA sales tax. 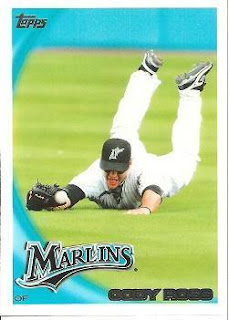 Sort of anti-climatic. Outfielder for a Phils rival. One time journeymen who has found a home with the Marlins, especially now that they have finally given up on Jeremy Hermida.

Since everyone has seen these already I will to a quick blow by blow of the pack. 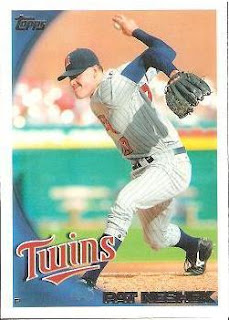 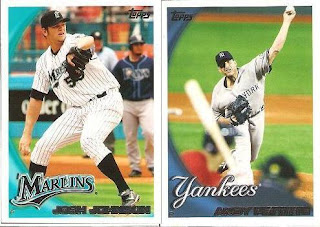 Among Phils Rivals Johnson is a Phungo Favorite. He was the ace of the team Phungo Fantasy Squad pitching staff that took the 2009 title.

Good Photo of Pettitte, but he Beat Phils in final game of 2010 Series >:| Getting past that - one wonders - Does Pettitte have HOF credentials? 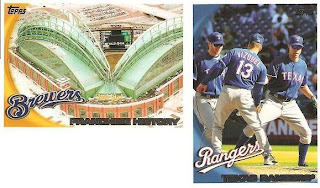 The above two cards came up back to back. Having both versions of team cards in the base set is confusing. I am not sure the regular team card is necessary - I would have preferred another middle reliever be thrown in there. I do like the Franchise History cards and may collect them as as a faux set. Although what is with Topps placing a Beer Ad smack dab in the middle of a Baseball card?? (click to enlarge and see alcohol ad) 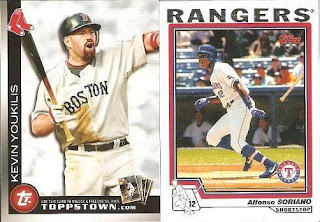 Pretty sure this is a Photoshop Special with Soriano in a Home Jersey AND the Yankees in the dugout also wearing the home duds. This card is of the SP back variety.

This insert set is likely on the to do list. 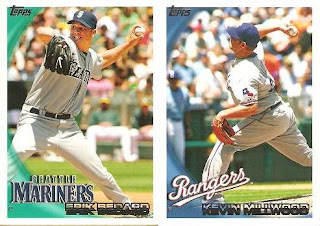 Ranger heavy pack. As a Brave Millwood is 29 games over .500, the Rest of his career he is +5.
He has not reached the Postseason since being traded to the Phils after the 2002 Season.

Notice both the Millwood and Bedard Cards were fed through the foil stamper incorrectly. The Players name (in black) is now in an ugly mess below the foil. Curiously the names are more readable when fed through a scanner - they are not when viewing the card for real. The Topps logo glances off the top border of the card and the players postition is also raised. nice job Topps.

I picked up a total of 5 packs on Friday and will be back throughout the weekend with additional thoughts.

I have very little new thoughts to add to what has already been stated elsewhere. I am happy with the look of the cards. The borrowed design does not bother me. The team logo is a bit large but not to much so. I could do without the foil. Solid Photography and Interesting inserts.

For those of you that keep track of such things, the cards are listed in the order in which they came out of the pack. To keep the pix face center, I may have flipped some of the card pairs in the scans.

Pull of the Pack

I am going with Josh Johnson here, Had the Yankees not just beaten the Phils in the Playoffs, I would likely go with Pettitte. I have always like Bobby Abreu, but everyone knows fielding isn't Bobby's strength. Soriano Mom SP is likely a favorite for many collectors

Meh of the Pack

Erik Bedard easily. The Mis-foiling of the card plus Bedard's rep as a soft pitcher when he was in Baltimore all add up to a Meh card.
Posted by deal at 1:09 PM

Abreau is very underrated, he has put together 12 straight very good seasons. What hurts him 2 of the teams he recently left won the world series.