A look back at the Originals - 1961 Topps Phillies

It is Topps Heritage Week all over the across the TradingCardBlogs (TCB) and I thought we would take a look back at the original vinage 1961 set. I am sure that somebody else will have a more comprehensive look at the set - Here I will focus on some Phils cards from the 1961 set. 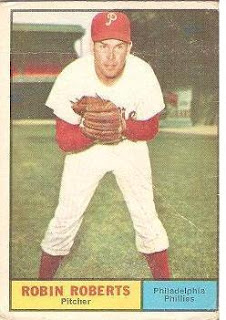 Robin Roberts is the only member of the 1961 Topps Phillies that would eventually enter the Hall of Fame. I am not particularly fond of the 1961 set, but the minimalist design has grown on me recently. The bulk of the 61 Phils cards in the Phungo collection have the same blue and yellow color scheme within the name and team sections as the Roberts card above. Some of the cards have the colors reversed (yellow player name/ blue team), while others are Yellow Green and Yellow Red. 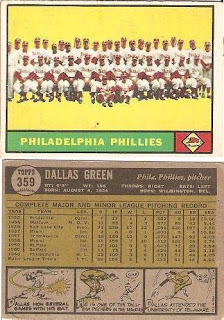 I do like the team cards in 1961 Topps. Posting the flip side of Dallas Green's card - I severely doubt that the Fightin' Blue Hens getting any props in the 2010 Heritage set. 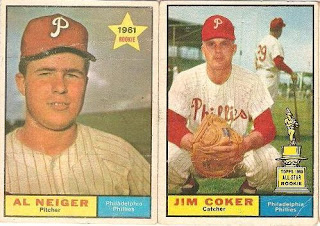 This is what the rookie cards look like sans annoying new MLB rookie card logo. 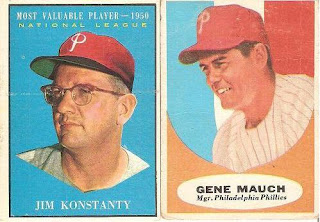 1961 Topps has quite a few special cards sprinkled throughout the set.

In 1961 Topps issued a subset of the last 10 MVP winners from each league. From what I have seen Heritage augments this concept a little by including Post Season Series MVPs in this years set. This is probably a good idea, or else Topps ran the risk of producing a subset dedicated to steroid use (Bonds, A-Rod, Giambi, Tejada)

Gene Mauch is featured on one of the Manager cards which have their own design. Other subsets included World Series Cards, All-Stars, League Leader Cards and a highlights series similar to "Baseball Thrills" from the 1959 Topps set.

In his review of 2010 Topps Heritage, Dave over at Fielder's Choice has come out with the most positive endorsement of photoshop on baseball cards. Personally I find it phony but do enjoy spotting the continuity errors that crop up when cards are modified.

With the advent of Photoshop gems like this Dick Farrell card, which is about 99% Phillies card with a smidgeon of Dodger influence accenting a bottom corner could be "a thing of the past".
Posted by deal at 10:15 PM