Another garbage game from the Phils, may possibly come back and update this later.  Phils lost 10-4 in a dull game.  The last time they brought the tying run to the plate was with 2 out in the 5th. Chase Utley who had a bad day at the plate grounded out. 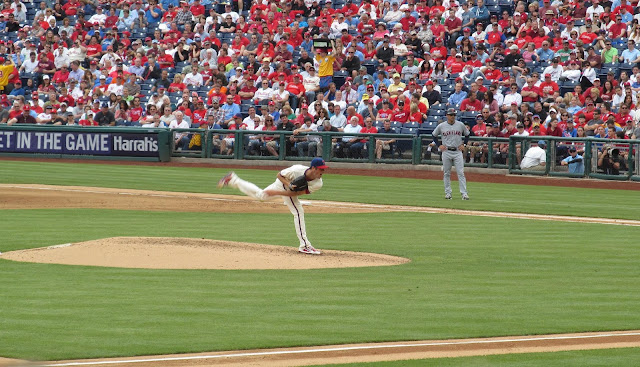 Hamels really stuggled, a lot of 3 ball counts.  It is a small miracle he made it through 5 innings giving up "only" 5 runs. The scrub end of the Phillies bullpen didn't fare any better. 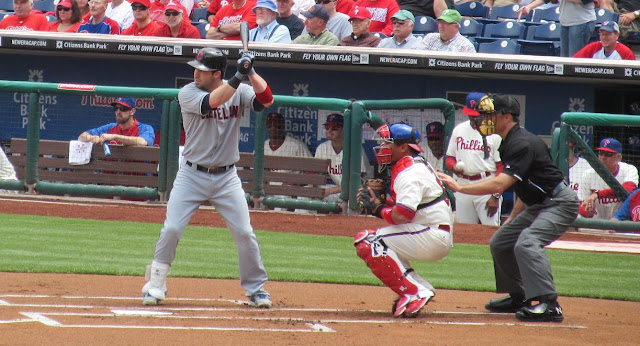 The only lefty in the Indians lineup was Kipnis.  This is from his first AB, when he flew out to pretty deep center.  It was the only time he didn't reach base all day. He had a Home Run and a pair of doubles plus a walk, good enough for the 4th best batting game score of the day accoring to baseball-ref.com The young Indians starting pitcher put together a quality start as the Phillies hitters struggled once again.  The amazing thing is the Phillies punchless lineup managed to get 3 runs.  They didn't work a walk until Michael Young reached via BB in the 8th with the Indians up 10-3. ﻿

2014 Topps
A Photo from this game was used for several 2014 cards of Chase Utley. For more information on those cards click here.