Phillies have a lot of questions marks on their roster right now.  One of those questions involves the gimpy Ryan Howard. 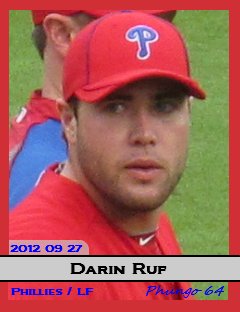 A year ago Darin Ruf spent about half of the season at AA Reading and the rest between, Lehigh Valley and the big club.  Unfortunately Ruf shares a position with Ryan Howard and in 2012 Ruf didn't arrive in Philadelphia until after Howard returned from injury.

The Phils did get to see Ruf play in the outfield and the defensive results were mixed. His batting was excellent, good BA and lots of pop.

Currently Darin Ruf is back at AAA and he has been ok, not as spectacular as a year ago. This weeks looming question of the availability of Ryan Howard raised the question of a Ruf callup, but apparently the Phils are more interested in AAAA 3B Josh Fields.

Hopefully if needed we will hear from Darin Ruf at some point this season, and he will produce the poser he die a year ago.  .

I like getting to the ballpark early for a lot of reasons.  I find it interesting and relaxing.  I enjoy BP sometimes you get a minor scoop - some injured player rehabbing, or a new callup.  It also affords one the opportunity to get some candid shots a bit closer up then you may get in the cheap seats. That is the case with the Ruf pix above.  He was shagging flies in the outfield, and I am sure I spent a good bit of time waiting for him to turn towards the camera enough to get a good shot.