How many other baseball players have a body of water named for them? 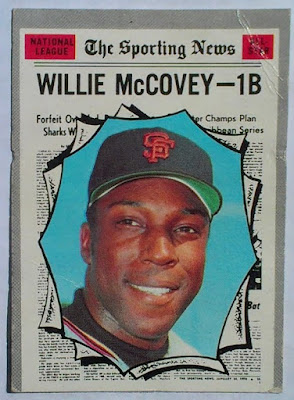 For me 1970 Topps ranks close to the bottom of the Topps canon.  I just can't deal with the grey border.  However I do like the All-Star cards.  I am a sucker for any newsprint related design and the bursting through the paper is always a bonus. I am really lazy or else I would have a checklist for this subset for my collecting needs - will add that to the never ending list of card tasks.

I am not sure where I picked up the McCovey card above, It may be a legacy from my childhood collection, I am not sure.  I suspect this card can be found in reasonable condition for under $2.

Willie McCovey was a first ballot Hall of Famer in the 1986 voting, which is a curious ballot that also has candidates Ron Santo and Dick Allen with similar WAR numbers but not only were both not first ballot guys neiether was ever elected via the conventional BBWAA process.  Willie McCovey had one distinquishing number that those two players do not, 521 career Home Runs - back when 500 home runs meant something - He still ranks 18th all-time. Beyond that his numbers are also impressive but that is the one that jumps out. He was a unanimous Rookie of the Year selection in 1959 (.354 BA and 13 HR in 52 Games).  A decade later he was the 1969 MVP, leading the league in Home Runs and RBIS (45,126). From 1968-1970 he led the league Slugging PCT, OPS, and OPS+.

McCovey was a member of the 1962 Giants NL Pennant team who lost to the Yankees in 7 games - McCovey was the final out of the series, Hitting a smash liner to Bobby Richardsion with 2 men on in a 1-0 ball game.

He also has #554 which is part of the Hi-Numbered All-Star Subset.  Which makes McCovey a bit of an oddity for the era as his first Base Card isn't until 1961 #517

Phillies
The Phillies are in a bit of a slump - hopefully they can change that out on the west coast.  Ryan Howard your assignment is to hit a few balls into McCovey Cove.