On May 20th 1983, 30 years ago today, Steve Carlton passed Walter Johnson's mark for Career Strikeouts (3508).  Earlier in the 1983 Season Nolan Ryan had also passed the Big Train. Gaylord Perry would follow in August. 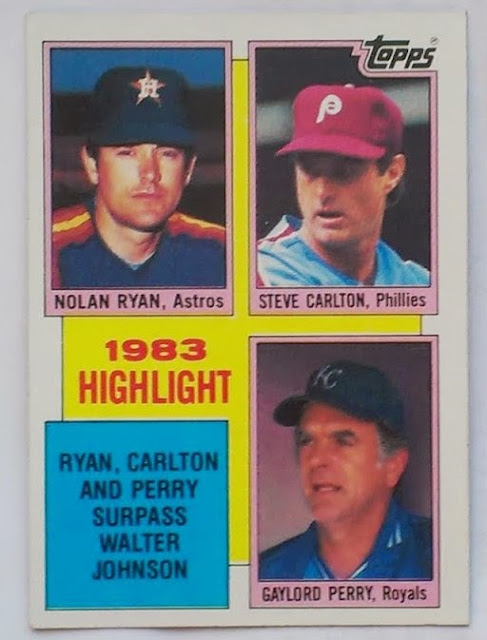 Topps noted the accomplishment as part of their Highlights Series that opened 1984 Topps. Carlton at times passed Ryan as the career strikeout leader but his career ultimately ended much earlier then the Ryan Express and Ryan would retire as the all-time strike out king.  Nolan Ryan remains the career K leader today. 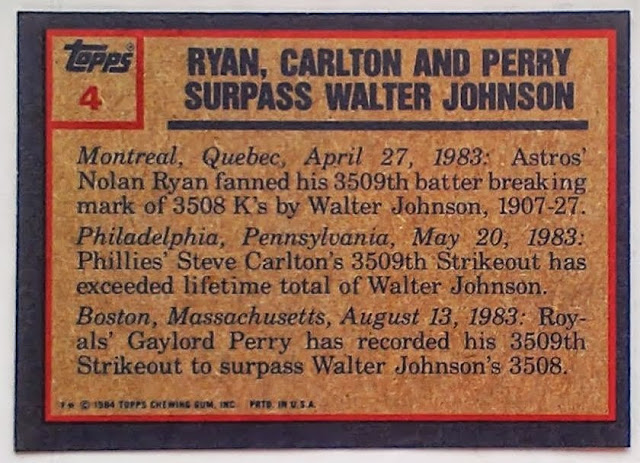 The flip of the card has a short blurb on noting the date and venue where each of the future Hall of Famer's passed Johnson.

For The Collector
The first six cards of the 1984 Topps set are Highlight cards.  Three of them are shared cards similar to the Ks card above.  One of which features Gaylord Perry again as a noted retiree (with Carl Yastrzemski and Johnny Bench) the other is a 1983 No-Hitters Card (Dave Righetti, Bob Forsch, Mike Warren).  The first 3 cards are all solo highlights - Carlton 300 Wins, Rickey 100 SBs, Dan Quisenberry Record 39 saves in a season.

1983 NL Champions
I am adding this post to the 1983 Phillies series we are running this summer. Past 83 NL Champs posting have included:
John Denny
Garry Maddox
Tony Perez