I recently saw the player that Baseball America has projected as the starting Leftfielder for the 2016 Chicago White Sox and his day was a horrible failure.


If you follow baseball prospects you likely remember Courtney Hawkins from the 2012 MLB entry draft. He is the guy that did a backflip on the podium after being drafted 13th overall. 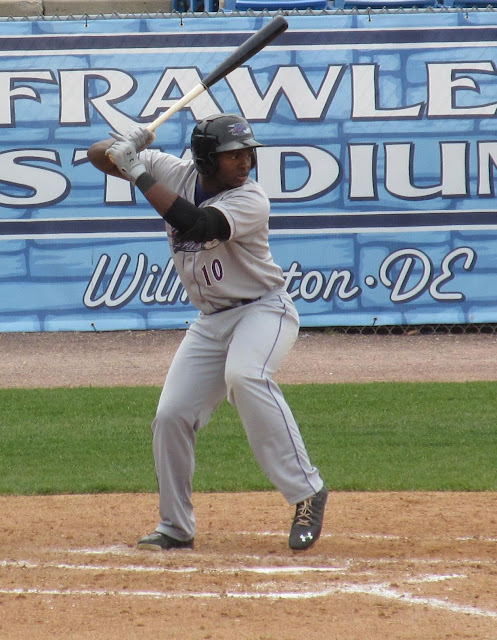 
This past Sunday Courtney Hawkins swung early and he swung often. He struck out and he popped out - for good measure he ran himself into an out on an agressive baserunning play off of an errant pickoff attempt.

His game Sunday v the Blue Rocks and a Non-prospect Starter (Aaron Brooks) is apparently not an anomaly.  He has struck out 45 times in 77 AB for Hi-A Winston Salem. It isn't just the Ks. It is the way he strikes out.  He had several check swings early in the count, fouling off pitches for strikes. He appeared to be really jumpy at the plate - perhaps that is slump driven.

On the flipside Hawkins at 19 Years Old is the 3rd youngest player in the Carolina League on and he does have 7 Home Runs in April. The White Sox have him on an accelerarted trek. He is a big man with decent speed, he didn't appear to have issues playing centerfield.
Throughout the day It appeared Hawkins was working closely with Winston Salem's hitting coach Rob Sasser. Hopefully the two of them can work through his issues. I consulted BA columnst @BenBadler via Twitter regarding Hawkins struggles and he mentioned that  recognition is a concerrn for the prospect.

Surprise
The two Dash players that had had great days were both non-BA prospects Starting RHP Chris Bassitt and Shortstop Chris Curley.  Bassitt took a no-hitter into the 6th inning, He pushed his record to 3-0 giving up 2 Hits and 2 walks over 7 innings.  Curley's 4-4 day included a double and a Home Run - He is batting .304 for the season and has been moved from 3rd to short this season.


The Home squad really didn't have any noteworthy performances.  2B Justin Trapp scored the sole Blue Rocks run and walked twice.  RHSP Aaron Books settled down after a rough first inning to get through  4 2/3 IP allowing only a single run.