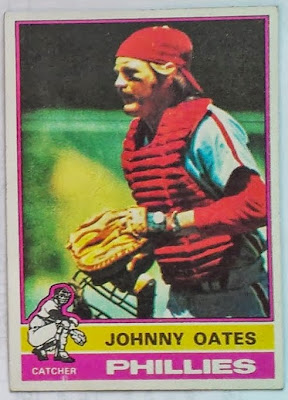 Oates, Of Course, having never played as a Ranger had his number retired as a manager. He led the Rangers to 3 division titles in the middle 90s. Unfortunately those Rangers teams all ran into the New York Yankees dynasty - losing 3 separate NLDS series.

The Rangers were Johnny Oates 2nd managerial assignment.  He also led the Orioles for the 4 seasons preceding his Texas tenure. Between the two clubs Oates tallied 797 wins v 746 losses.

Like many managers Johnny Oates spent his playing career as a catcher, most of those years were as a backup - He only played in 100 games once (1974 - Braves).  He played two seasons with the Phillies which included the 1976 season when the they reached the post season for the first time in 26 years.

For the Collector
1976 Topps commons can be found in dime boxes, and sometimes nickle bins. Like the shot of Oates in the card above. He has all the catcher gear but with the maks off you get a shot of his profile complete with eye black. Couple of bonuses as well, the reverse cap and the old school powder blue travel unis for the Phils.

The Rangers current manager Ron Washington was profiled in here as part of our Moneyball 2011 series.