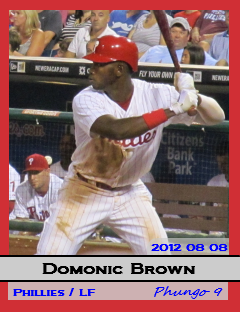 Day off for the Phillies today and we are going to post a Phungo Card.  Dom Brown had a game tying hit in the 9th inning of the Phils game yesterday.  Good to see as the Phils need to get more offense from their outfield.  Brown has a decent 6 homers and 18 RBIs as the Phillies near the quarter pole - but he is going to need to hit better than .250 with a .301 OBP for the Phils to succeed.

This photo was taken on August 8 of last year when the Phillies hosted the Braves.  Phils had a bad 7th inning and some random fan bestowed tix to great seats behind the Braves dugout to us, so I ended up snapping a bunch of close up shots from in the final couple innings of the outing. At least team Phungo got something out of a night when the Phillies got crushed.