Through 6 starts Roy Hallday has had it pretty rough.  He isn't the only Phillies Star pitcher to get off to a bad start.  Roy Halladay's 2013 Numbers so far look an awful lot like the 1986 numbers for a different Phillies Ace from a generation ago.


1986 was the beginning of the end for Lefty - after those six games, Carlton only started 10 more games for the Phillies.  He was eventually released and muddled through mediocre starts with the Giants and White Sox going 9-14 for the season. Carlton struggled through 2 more years before retiring in 1988. 1988.

Obviously Carlton and Roy Halladay are very different pitchers. Carlton is a Hall of Famer and significantly more decorated. Roy Halladay is a Righty, Lefty is not. And most notably Steve Carlton was 41 in 1986, Halladay won't turn 36 for another couple of weeks.

But the six game numbers are there.  They have virtually the same innings and ERA.  Carlton's six starts were actually much worse when you factor in the 7 unearned runs, but Halladay has the three extra Home Runs leading to the 24 Runs he has given up.

I hope that Halladay's six starts are not history repeating Lefty's six starts from 1986. Every pitcher only has so many pitches in his arm, and maybe we have seen all of Doc Halladay's

Time waits for no one - Not Steve Carlton and Not Roy Halladay. 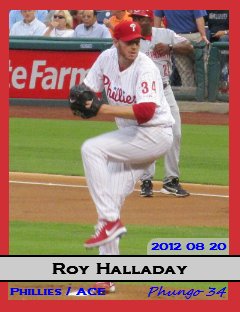 This is at best a statistical oddity. I think you're looking for more meaning in this similarity than is actually there.