Couple of cards from a recent Nachos Grande group break. Unfortunately, Topps came up a little short on coallation and there were some duplicate autographs/hits in the break. Regardless 2014TSC has some quality photography and some fun shots. 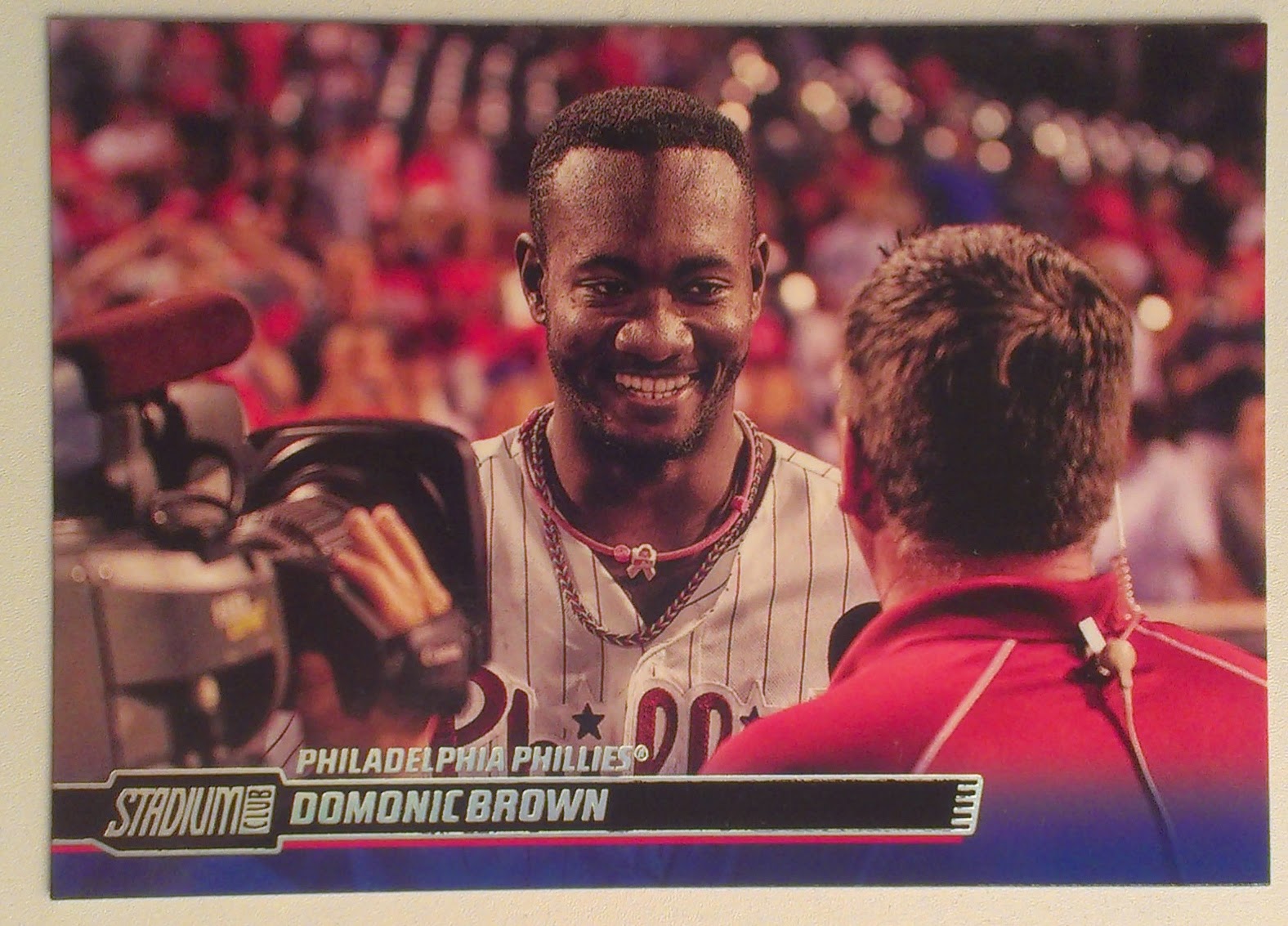 One of the blogs I miss most is Dinged Corners. I bring this up here because they had a collection of players smiling cards. If they are still collecting the above Dom Brown card surely would be a candidate.

When I first saw this card I also noticed that Brown is being interviewed by CSNPhilly broadcaster Gregg Murphy. I asked Mr Murphy about this via Twitter (@GMurphCSN) He noted "My Best side for sure" 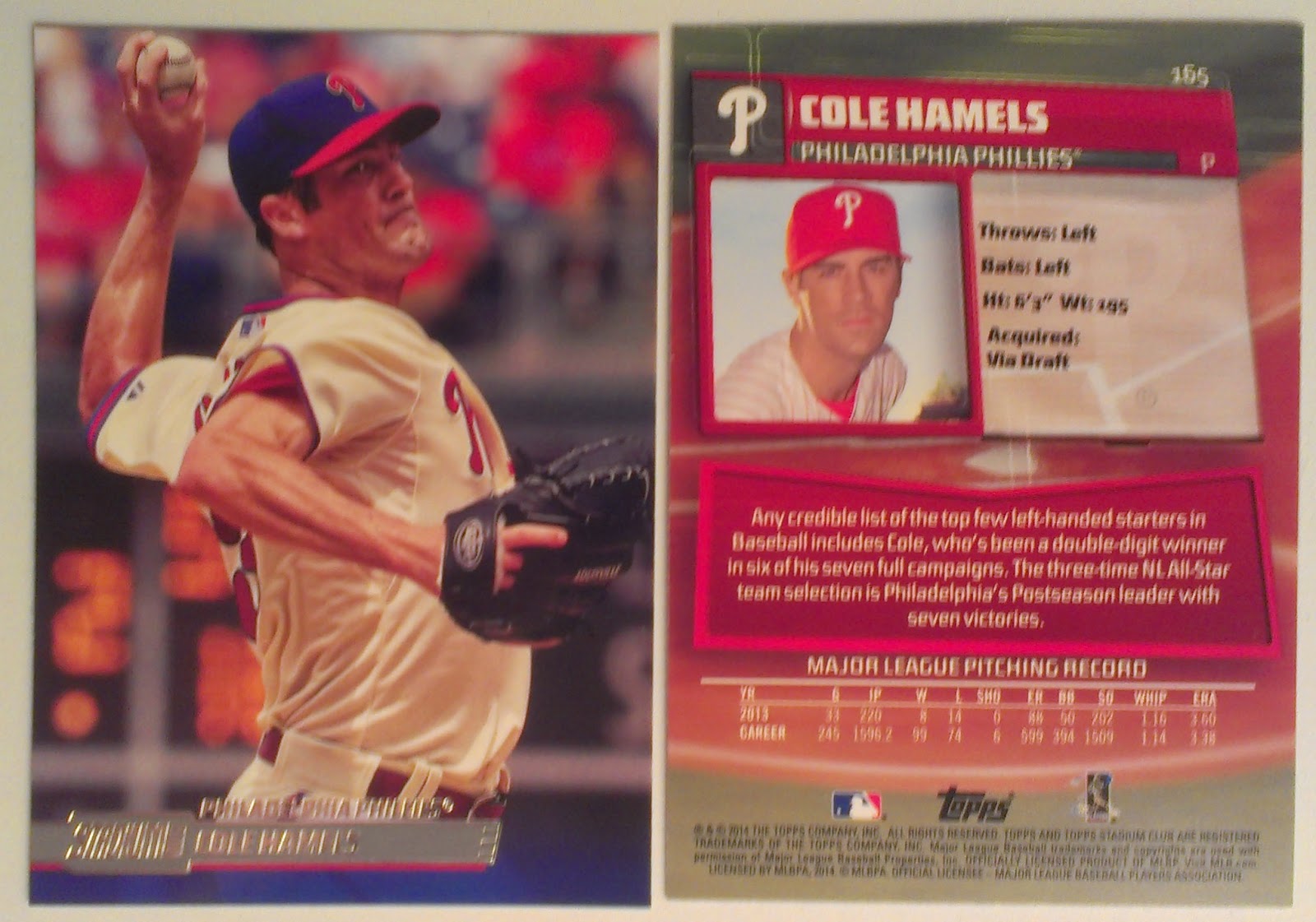 As mentioned above the collation among the boxes in the break wasn't great. A product of this was getting two Cole Hamels cards, which makes it easy to display the front & back of 2014 TSC in a single photo.

Nice Pix, kind of a Meh back. basically a 6 year old blurb, minimalist demographic info and stats. I would think TSC would be better suited for more SABRmetric stats than WHIP. 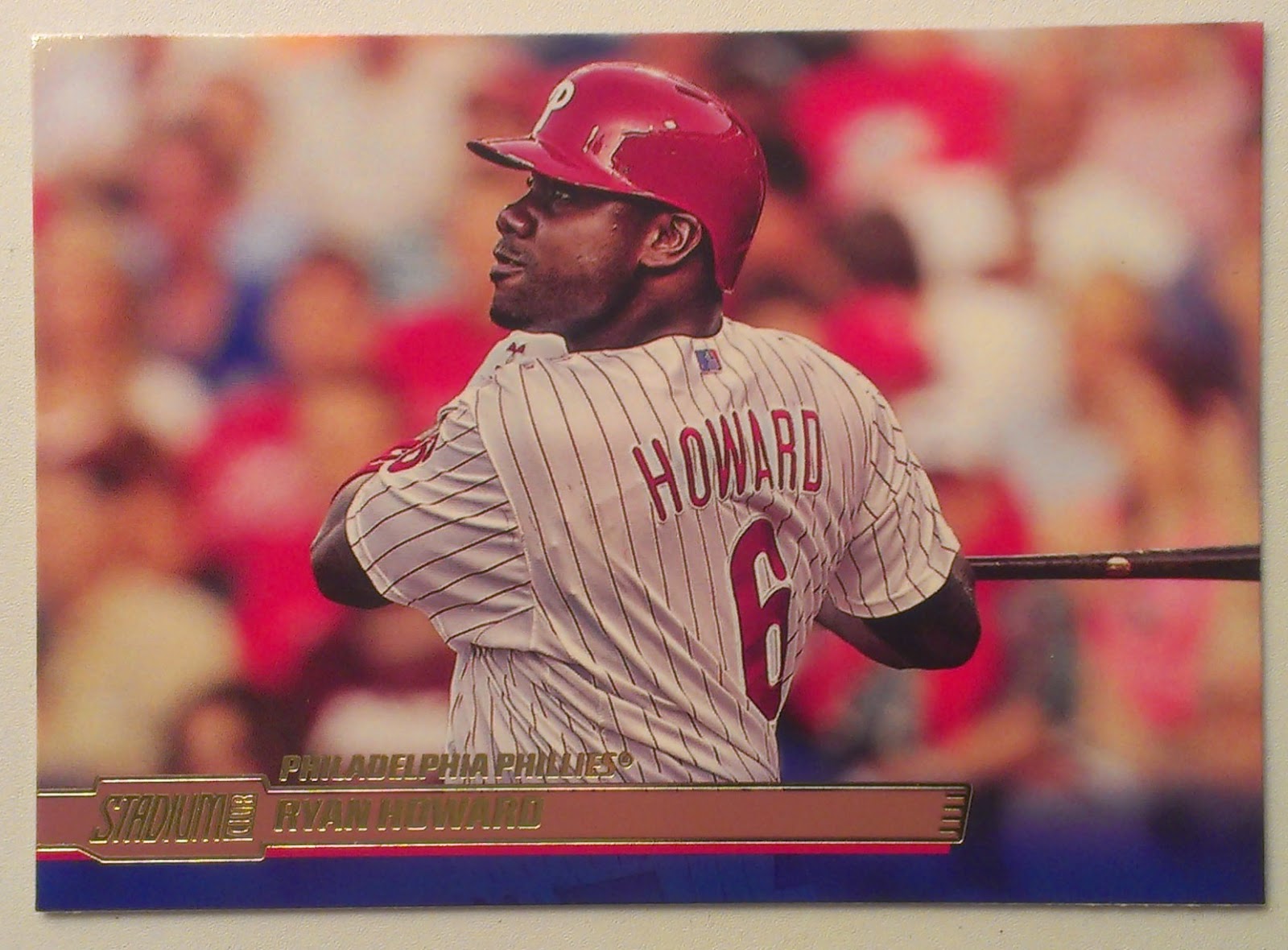 According to Cardboard Connection gold foil parallels appear one per master box. The card is running at a BIN of $3 on ebay 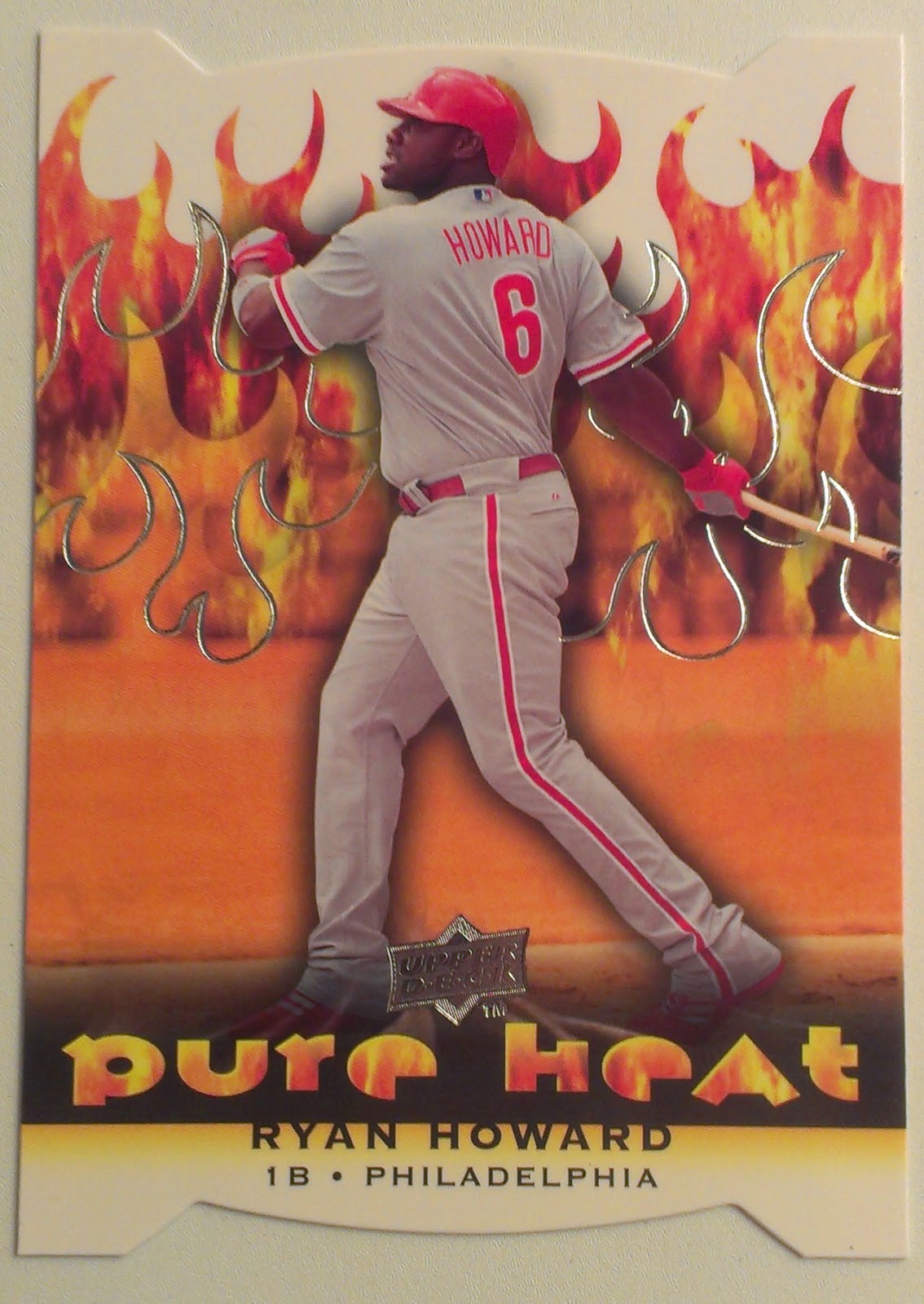 Nacho's Grande being the good Group Breaker that he is threw in some bonus box breaks and cards. This is a nice Ryan Howard Die Cut by 2010 UD.  This was an unlicensed product and we don't see the Phillies nickname on the front, however it is on the text of the cards b-side. 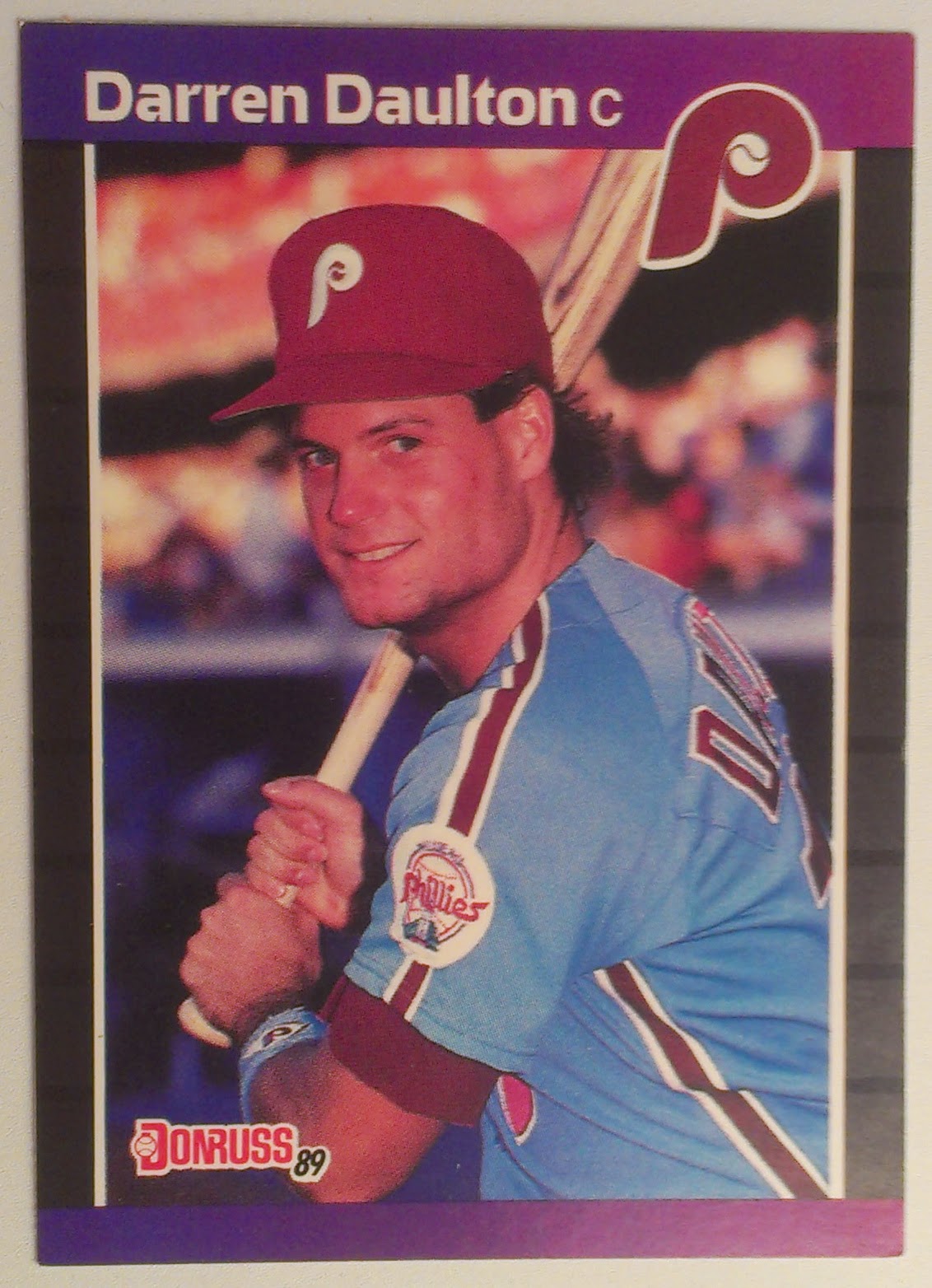 The 1989 Darrren Daulton Donruss Card is noteworthy for featuring the Phils Catcher posing in a right-handed batting stance. Earliest this year The Phillies Collector Blog asked Daulton about the card/pix and got the scoop from the subject himself. Happy to get this card as a bonus in the Group Break.