Tony Clark was a switch hitting first baseman who spent the first half of his career with the Detroit Tigers and the remainder as a journeyman with 5 other clubs. 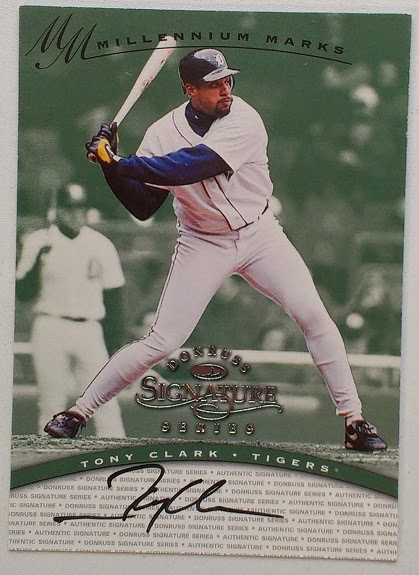 During His 15 year career Clark's teams made Postseason Appearances: 2004 Yankees - he was the 1B tasked with holding on Dave Roberts in Game 4 of the ALCS  and 2007 Diamondbacks. Other career Highlights include tallying 251 Career Homers, representing the Tigers at the 2001 All-Star Game and finishing 3rd in the 1996 AL RoY voting which was won by Derek Jeter. 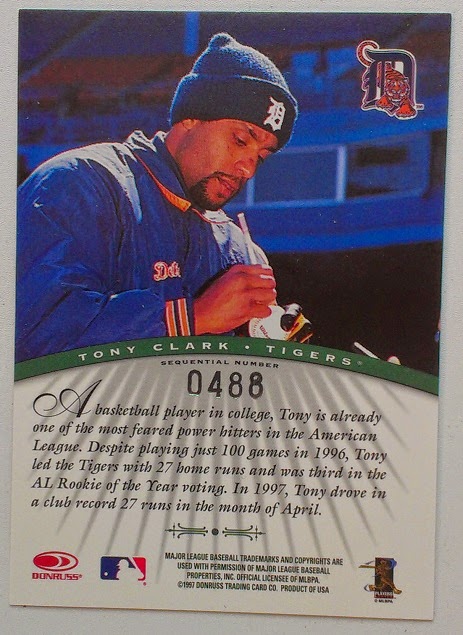 Ran into something interesting here, An autograph card featuring a photo of the player yes signing an autograph. It isn't that complicated to put this card together, but I am not sure I have ever seen it done elsewhere. Is there a -graph collector out there that has any insight on this?

In 1997 the Donruss Signature Series came in 3 parallels: Red which were the commons, Green shown here - typically numbered to 1000 although Clark is serialed to 900, and finally Blue which are numbered to 100.

Phungo HOF Verdict
YES - a surprise Yes vote team Phungo. Last December Tony Clark became the head of the MLB players association (MLBPA), He is the first former player to lead the union. Clark is the fourth person to lead the MLBPA, a position that was originated by Marvin Miller.

My Tony Clark YES HoF vote is a protest vote against the various folks that have rejected Marvin Miller over the years. Miller may have never played on the field but his leadership changed how players in all sports are compensated, All one has to do is look at the salaries players are earning to realize what Miller has meant to the sprot.