With Sunday Night Football in Nearby Green Bay We will take a look at a Milwaukee Brewer Alum that is on the 2015 HoF Ballot. 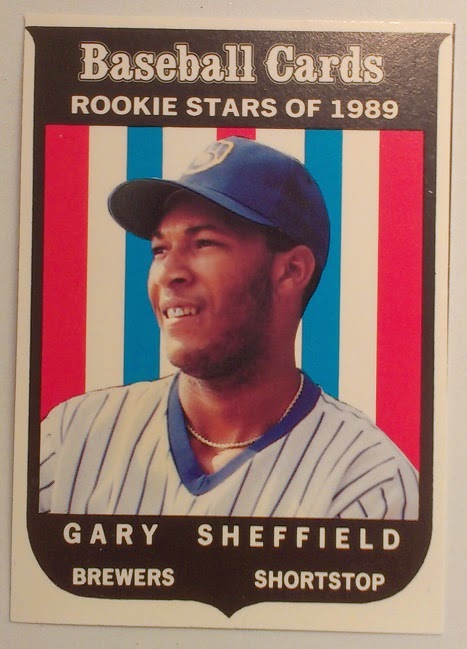 The Brew Crew took Sheffield out of high school with the 6th overall pick in the 1986 draft. Two years and a few months later He was with the big club. It was the beginning of a 22 year career that saw the nine time all-star Win a World Series (1997 Marlins), and post 509 Home Runs (25th all time) , 1676 RBI (26th), and score 1636 Runs (38th) all on the way to five Silver Slugger Awards. He never won an MVP award, but he did finish 2nd or 3rd three times. Sheffield finished 2nd in oWar twice, both times he was bested by Barry Bonds.

Hall of Fame
We have established that Gary Sheffield accumulated ridiculously good numbers during an offense heavy era of tbe game. What does it all mean? Well the good folks at fangraphs and baseball-ref have designed the WAR stat to be independent of era. According to BR Sheffield Ranks 18th in career WAR for the position, Jay Jaffe's JAWS rating which combines WAR with Peak War ranks Sheff 23rd.  RF is also the most populated position in the hall with a lot of candidates similar to Sheffield lurking (Ichiro, Vlad, Bobby Abreu, and the surprisingly strong candidate Larry Walker)

My Verdict is a YES. His numbers are on the good side of the borderline, He has a World Series Ring, but No MVPS - however he was on a bunch of All-Star teams and has a couple of silver slugger bats laying around. If ti wasn't for Barry Bonds he would have 2 oWAR titles and he may have won an MVP.

1989  Baseball Cards Magazine
30 years after the initial release of 1959 Topps, Baseball Cards Magazine homaged the set with a set of their own. The set was issued as 6 card sheets inserted into the magazine throughout the year. They were even thorough enough to create a template for the 1959T Rookie Stars subset.

The card isn't in error on Sheffield's position, he came up as a shortstop. His career didn't really take off until 1992 when he was traded to San Diego where he became a third baseman. The following season he was moved to the Marlins where he finally found his home in the outfield - which is where most of us place Gary Sheffield.