Congrats to this years MVP Winners Mike Trout & Clayton Kershaw. Today as part of our Phillies 2015+ Project we turn back the clock 7 years to the 2007 NL MVP Winner, Jimmy Rollins. 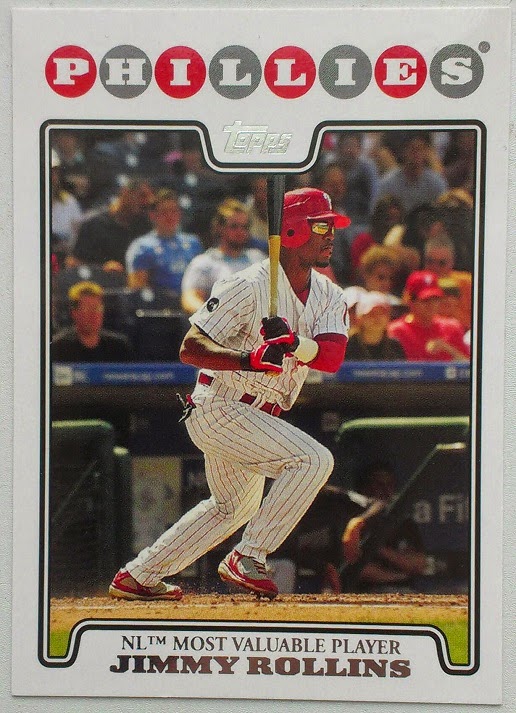 Well we are not really turning back the clock - Phils fans would definitely love to have the 07 version of J-Roll. Unfortunately time marches on and a 36 year old Jimmy Rollins is expected to start for the Phillies in 2015.

2014 was a decent year for Rollins. His batting average down, but OBP was right around his career average. His slugging number down, largely because of a dip in doubles - His 17 Home Runs were right at his 162 game average. Speaking of games Rollins played 138 games in 2014 - His 609 Plate Appearances was the 2nd lowest of his 14 full seasons.

Comps
All 10 of Jimmy Rollins age 35 Comps played beyond age 35,It is an impressive group of players topped by Joe Morgan and Derek Jeter with Craig Biggio, Ryne Sandberg, Lou Whitaker and Alan Trammel and Robby Alomar all in the list. Five of those players still had 4.0+ WAR left in them - Joe Morgan was tops with +15.5 WAR.  According to Baseball-ref projections Jimmy Rollins should expect to accumulate 3.5 WAR for the rest of his career.

The projections have Jimmy finishing with 2574 career hits.  426 shy of  the arbitrary 3000  that has made any non-PED player an automatic for HoF voters. Jimmy is currently at 2306 hits, which means B-R thinks he had 268 hits remaining - slightly more than double his 2014 production - or another way of looking at it about 2 years worth of hits.

Verdict
The projections sounds about right to me. I see Jimmy playing through the 2016 season and getting slightly less than his 2014 production.  I give him +2.0 WAR for 2015. In our Phillies 2015 running WAR total we are through 3 players and have arrived at 55 Wins.

The photography on 08 Topps is worthless. Fortunately They got a decent pix of Jimmy on the MVP Card, The base card photo is HORRIBLE. 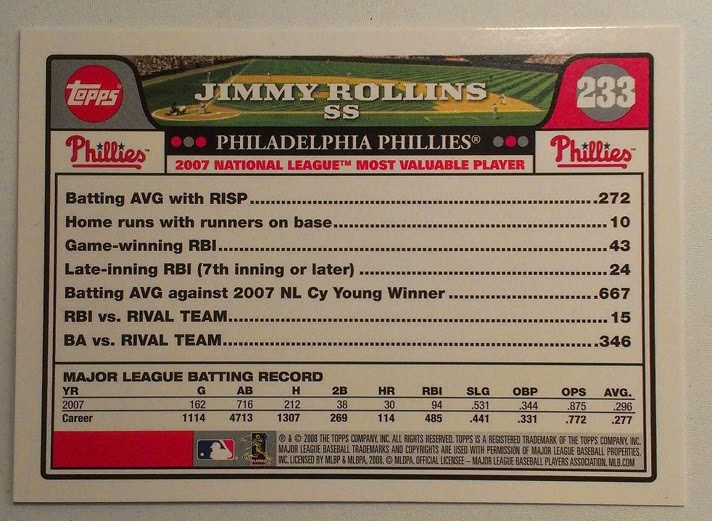 
The B-side of the card shows a grab bag of Rollins MVP Qualifications. Curious picks - the BA with RISP (.272) is 24 points lower the BA Overal (.296). The 43 Game Winning RBI cannot be right - that isn't even an official stat anymore - but when it was the league leaders were in the teems if I recall correctly. The Most important stats are at the bottom - Rollins 15 RBI and .346 BA versus the Mets who the Phillies overtook on the last day of the season to win the NL East. This of course was their last win of the year as they were swept by the Colorado Rockies in the NLDS.