Tonight at 7p ET Aerialist Nik Wallenda will be taking his high-wire act to Chicago and the rest of the world via the Discovery channel. 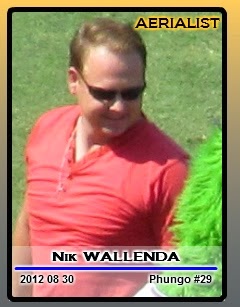 Apparently Wallenda will be attempting two different walks between 3 Chicago Skyscrapers one of which will be blindfolded. This probably won't draw my attention away from football but I am sure some folks will check in.

Nik Wallenda did a public appearance during the Phillie Phanatic's 5th inning wildcard sketch at a game in 2012. I think they laid out a rope on the field and both Nik and the Phanatic walked across.

The above card is one of the non-baseball cards from the 2014 Phungo set. During the playoffs and World Series I have been working on 2015 Phungo. I am about half way through the base set. In the recent past sets we have had some distribution issues. I hope to get more Phungo Cards sent out this year and in more timely fashion.