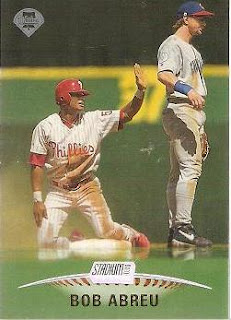 Late last year Thorzul ran a $5.50 group break. Unfortunately there weren't a ton of Phils this time around, but this sharp looking "Bob" Abreu card was among them. I picked up roughly a dozen cards in the break most were the 1999 UD MVP set.

The 99 Stadium club Cards feature some great action shots. I tried to play Name the Game with the Abreu card but unfortunately found two possible games. June 13th and 14th 1998. Abreu and Mickey Morandini played in both games. Both Games were day games and Abreu was on 2nd base several times between the two games. I am betting it is the 6/13 game as Abreu did everything but make the post-game buffet during that game.

This one was a little slow but I still always love the Thorzul group breaks, unfortunately I was out of the country and missed out on his latest one, but plan on getting involved in future breaks.
Posted by deal at 8:03 PM