Welcome to Opening Day Folks - well Opening Day for the Phillies, since The Astros hosted the Rangers last night (technically Opening Night I supposes).  The Phils don't play v Atlanta till 7p tonight -so once again technically they are also part of Opening Night - pt 2. 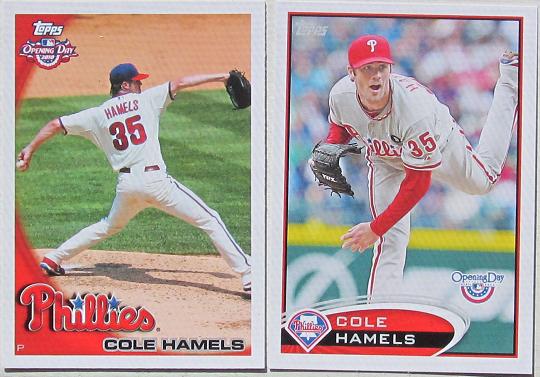 Cole Hamels has NEVER started an opening day game.  This is for various reasons. Since Roy Halladay arrived in Philadelphia he has been without a doubt the Ace.  That changed in 2012 - Now Cole Hamels has earned that role.  Prior to Roy Halladay, Hamels was a rung below at least one other pitcher, including folks like Brett Myers.

I have not done the research but when Cole Hamels signed his $140MM+ contract last summer, it may have made him the highest paid pitcher to have never been an opening day starter.

This changes tonight, as Hamels will be on the mound v the Atlanta Braves. 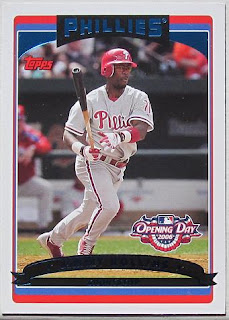 I thought today would be a good opportunity to check out the Topps Opening Day logo through the years.

The Topps OD Logo has matched the MLB Opening Day Logo the last few seasons. The logo has been used at least the last 2 seasons - This logo is on the Cole Hamels 2012 Topps OD card at the top of the post.

Prior to that the Topps OD logo was a similar with a bunting/drape design. This design was used starting in 2005, and varied only by the year placed in the center of the logo. You can see this logo on Jimmy Rollins card above, which is similar to the 2010 Cole Hamels Topps OD at the top.

From 2003-2005 Topps created special logos for their Opening Day brand. There really isn't much connection between the logos other than the all feature the year. I know that the 2003 Topps OD set included minis.  Other OD sets may have included them as well,. 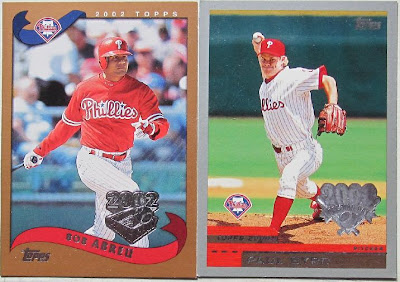 I am not sure when Topps first produced Opening Day - my limited research found cards going back to 2000.  The 2000-2002 cards feature an Opening Day foil shield. Note on the early Bobby Abreu card he is simply Bob.

There you have it internet - A quick look at Topps Opening Day Cards through the years.

I believe the first set named Opening Day was in 1995, but it was an insert set. As far as standalone sets, they started in 1998.

hiflew is correct. The original Opening Day sets were also much smaller than today's versions. There are a grand total of three Phillies cards in the '98 and '99 sets -- Rolen in '98, and Rolen & Schilling in '99.