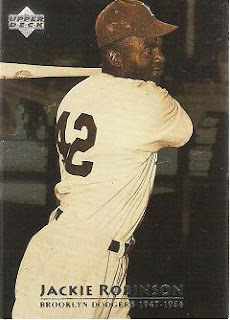 Today is April 2nd or 4-2, which happens to be the number worn by Jackie Robinson. Robinson is, of course, the player that is remembered for breaking the Major League Baseball color barrier and leading the Brooklyn Dodgers to the 1955 World Championship - The last title the Dodgers would win in Brooklyn.

Robinson was a 28 year old rookie when his career started. Baseball reluctance to add black players to their rosters likely cost Robinson four or more years of his career, which spanned 10 years. Still Robinson accumulated 1518 hits, 137 Homers, 197 Stolen Bases and was a career .311 hitter. He had a tremendous 740-291 K/BB ration which help him carry a .409 OBP number.
Jackie Robinson was inducted to the Hall in his first year of eligibility (1962) and his uniform number 42 has been retired across baseball. On April 15th of each year Major League Baseball marks the anniversary of Robinson's 1947 debut by hosting Jackie Robinson Day. Teams and players often where the number 42 in recognition of the event.
On April 15th the Dodgers host their arch-rivals, the San Francisco Giants on Jackie Robinson day. The Phillies will travel to DC to play the Nationals.
The Jackie Robinson Foundation was founded by Rachel Robinson in 1973 to honor the memory of Jackie Robinson and facilitate the education of minority youth's in need. JRF aids these youths by providing a scholarship fund for continuing education. The Foundation also provides additional support through an extensive mentoring program.

For the Card Sharks

At this time there are no Jackie Robinson auto cards in the recently completed auctions. There are a few cut signature Buy it Nows available for well over a thousand dollars.