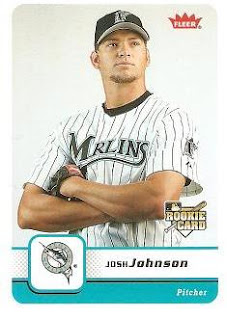 On Friday night Josh Johnson put together another great start for the Florida Marlins. He held the Phillies scoreless on 3 hits over 7 innings. Unfortunately for the Fish they were undone when their closer, Matt Lindstrom, had trouble getting the ball over the plate. In the end Shane Vicotorino would hit a Grand Slam and the Phillies would snatch a victory from the Marlins in what appeared to be a certain loss.

I am sure my view on this game is significantly different then today's Phungo 5 guest, Mario from the extremely popular and very interesting Wax Heaven. Florida has struggled a little in the past week, but still have a good early lead in the division. Mario appears to be in a state of guarded optimism as the Marlins keep churning out young talent and admirably challenge the titans of the NL East despite having a huge payroll deficit.


1) You have recently announced that you are focusing your collection on Andrew Miller and Canseco. You were drawn to Miller almost instantly on his arrival to Miami, what started your infatuation? and as a fan and colector what do you think the Canseco and Miller have in common.

When I returned to collecting after 10 years away and five years from watching my last baseball game, I had no idea who 75% of the players were. One of the first products I opened was 2007 SPx and I ended up pulling an Andrew Miller autograph which at the time booked for about $50 dollars. From that point on I casually picked up his cards but wasn't really a fan and then when the Marlins traded for him I was shocked and knew I had to start collecting.

He and Canseco, who I have been collecting for 20 years have nothing in common. Jose is cocky and sometimes arrogant, Andrew is shy and down to Earth. My wife and I have met him three times and one day when I ran into him alone he asked me where my wife was, even remembered her name! Many Marlins are like that, including Dan Uggla.


2) The current Marlins pitching staff is very strong (consequently the team is off to a scorching start) - do you think 20 years from now that one of them will be viewed as the greatest Pitcher in Marlins History? Or do you think that honor will belong to a Marlin from the past (Dontrelle or Josh Beckett)

Let's be real here. When Alex Fernandez, Livan Hernandez, and Dontrelle Willis are viewed as some of the Marlins all-time greats, it sets the bar pretty low. I think Josh Johnson, Chris Volstad, and Andrew Miller will all become Marlins greats before being traded away to big market teams.

3) Your moving more into the Photography end of things these days. As far as actions shots, is there any particular area in the stadium you try and get to for your photos?
I like photography because unlike collecting, once you buy a camera you don't have to continue to spend more money. In the beginning I used to sit in the first row of the outfield but I got tired of taking pictures of the player's back. Today I always sit in the visitor's are by third base cause there are more right handed pitchers than there are left, plus I love photography lefties for some reason, especially Ryan Howard.


4) Darrent Daulton and Jim Eisenriech are both prominent former Phils, but won a World Championship as Marlins. Any recollections of the two?

Darren Daulton was awesome and one of my favorites on the team when he was here. Jim on the other hand, I hardly remember.

I love the Phillies. It's sad when commentators try to stir the Florida vs. Philadelphia rivalry when their really isn't one. Our true enemy has shown their ugly faces and they come from New York.

5) Last summer I met some relatives of Sean West - real fine people. Can you tell us anything about him. I see he is in the Marlins top 30 prospects.
I saw Sean West a lot during Spring Training. Since I never saw him pitch, the most I remember about him is how tall he was. We have a lot of really tall pitchers.

Thanks to Mario and the rest of the Wax Heaven family. I know they are both busy running a couple of projects and raising one of the newest Marlins fans and do appreciate their time. It's pretty remarkable to see that Wax Heaven is creeping in on a MILLION hits - not bad for covering a "dying hobby".

For a look back at a previous Phungo 5 click here for our inteview with Brewers authority Thorzul and you can read how he foresaw a near no-hitter by Dave Bush.

Next week the Phils host the Washington Nationals. Phungo 5 will feature a team that is descended from a previous DC tenant, The Washington Senators, when we speak with Texas Rangers Cards.