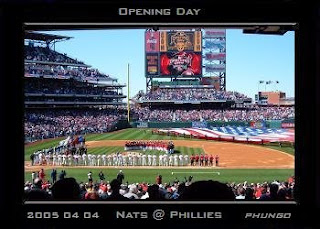 Today is Opening Day for the Phillies. Even though it is their 3rd game of the season. Sunday was Opening Day for Baseball, but it really was a night game, Tuesday's game was also a night game. Today is a getaway day for the Braves, thus a good opportunity to schedule the Phils first day game of the year. Today's schedule also includes the ring ceremony for the World Champions - Pat Burrell even flew in from Boston for the event.

The Phungo Card above is from Opening Day back in 2005. I am sure the photo looks pretty familiar to Phungo Readers. It is also the picture that is in the Phungo banner, It was taken prior to the first game ever played by the Washington Nationals. The card is part of the unnumbered Phungo Black Frame series.
Unfortunately the Phils are off to a rough start today and will have to come up with some offense to avoid being swept.