The surprisingly hot San Diego Padres are here to play the Phillies in the first home series since the death of Harry Kalas. It is an emotional weekend in South Philly, hopefully the Phils will be able to remain focused and play well against the Padres.
For the Fightin Friars Phungo 5, I have enlisted the help of Rod from Padrographs who is in the process of chronicling over 700 San Diego Padres autographs on line. Rod has also recently begun an interesting project of collecting cards that represent every Padres Starting line-up - Great idea nine players in a starting line-up, 9 pockets on a card page.
1) Your reviewing your autos (700+) in Alphabetical order. how long do you anticipate this task taking?
Well if all I did was the Padrographs and did one per day, it would take two years. But since I keep adding to the total and am blogging about other things and have a life it could take several years. I am at 715 as of today (4/13/09) and have about 12 guys out in the mail, plus a few others that I haven't been able to track down. By the way if anyone is going to see the Erie Sea Wolves play let me know, they have a player that I need a signature from.

2) The Padres are off to a Hot start - who is the biggest surprise to you?

Hundley and Headley have really been amazing for just getting started in MLB. I hope that the team can keep up this pace. It will be amazing if they do, but the really important thing is finishing ahead of the Dodgers and Giants.

Note: Hundley came up with a big hit in the Pads Friday night victory over the Phils.

3) Among Padres Phillies Connections John Kruk comes to mind, can you think of any other interesting ones?

John Kruk is one of my all favorite players, we have the same Buddha body shape. Another Phillie Padres connection is a local player from Portland, the man who once wondered why do we drive on a parkway, and park on a driveway, and if packing peanuts are for shipping stuff how do we ship them. Ladies and germs, Larry Anderson 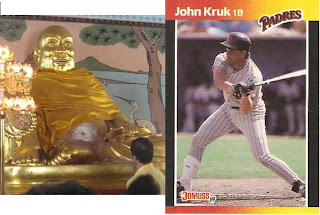 
4) According to some of your blog entries you have been away from Southern Califormia a long time. Has it been hard to maintain your allegiance to the Padres?
I was originally born in SoCal, Long Beach to be exact. I would have gone to the same high school Tony Gwynn if we stayed where we lived when I was born. I moved from Long Beach to Honolulu to Ferndale to Oxnard to Newport, RI to Norfolk, VA to Long Beach to Big Sur to Eugene to Portland to San Diego to Chicago to Oakland to Portland. I have been here since 1981. I became a Padres fan when the brother of my classmate, Jill Roberts, Dave Roberts was drafted by the Padres. I have followed them since, more or less.

5)Better Mascot - The Phanatic or the San Diego Chicken?

The San Diego Chicken. I was in San Diego before he became the San Diego chicken when he was a mascot for a local radio station.

Padrographs gets a 5 outta 5. I thought I would have to ding him on the Mascot Q, but he came up with a good enough justification for favoring the chicken - And anytime Larry Andersen gets mentioned that is always a bonus.

I would like to thank Rod for his time, well thought answers, and for giving me the opportunity to post the Buddha picture. For a look back at a previous Phungo 5 click here for a look at Trader Crack's 5.
Posted by deal at 1:00 PM