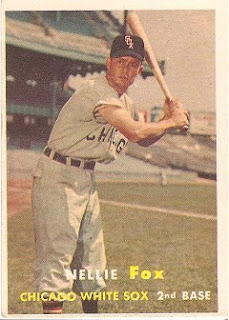 1957 Topps #37 Nellie Fox
50 years ago today the 1959 season began. The 59 season was great success for the Chicago White Sox, they won 94 games and the American League Pennant. The Chisox also had the top 3 finishers in the MVP voting. I didn't have the patience to look it up, but I cannot imagine one team having the top 3 MVP candidates. The Three players were Fox, Luis Aparicio, and Pitcher Early Wynn. Wynn also took the Cy Young Award that year. Additionally that same year the Cubs had the NL MVP in Ernie Banks. Two teams in the same city winning both MVP awards has happened several times, especially back when New York had three teams. Most recently it happened in 2002 when Team Balco swept the awards with Barry Bonds winning the NL and Miguel Tejada capturing the AL Award while with the A's.
During his 19 year career Nellie Fox spent 14 seasons with the White Sox. He was originally signed by Philadelphia's other team, the A's, in 1944, but was traded for Joe Tipton. Fox racked up 2663 career hits and never struck out more than 20 times in a season. The 13 time All-Star led the league in hits 4 times and was know as a old school palyer (even in 1950s they had old school players) who fielded his position well - He set the consecutive game record for 2nd basemen at 798.
Fox was not elected to the HOF by the BBWAA - he was denied in his final year of eligibility (1985), falling just short with 74.6% of the vote. In 1997 the Veteran's Committee Made Nellie Fox a Hall of Famer.