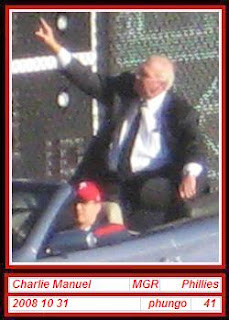 Manuel offered up the following quote when he was told that there would be bobblehead for him "If somebody would have told me when I first took this job that I'd have a bobblehead, I would have told you at the time that I'd be headless".

Winning does change everything.

In years past nearly every spring Manuel was on the edge of getting run out of Philadelphia. He had to replace a legend in Larry Bowa - to his credit Charlie never complained, blamed anyone else, or ducked the criticism. He just got his teams prepared and put his players in situations where they could succeed - And they did. Now he has a World Series Ring and a Bobblehead to prove it.

The Phungo card above is number 41 in the Phungo Set, which matches Charlie's uniform number. The Photo was take on October 31st of 08 during the Phillies World Championship Parade. It was one beautiful and glorious day but....... well, Charlie sure looked uncomfortable in that suit.

Click here for a Phungo profile on Charlie and if you want to know more about Phungo Cards click here.
Posted by deal at 6:49 PM